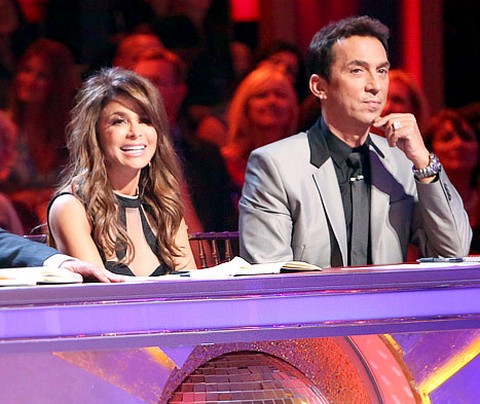 We previously reported that Carrie Ann Inaba is worried that Paula Abdul may replace her during season 16 of Dancing With The Stars. Paula has been on the show as a guest judge, and her heartfelt feedback may be more inline with Bruno Tonioli and Len Goodman. Carrie was so furious that she refused to talk to her fellow judges, but it looks like Paula may have completely blown her chance to sign on as a full-time judge! Paula nd Bruno were spotted at Cecconi’s in West Hollywood, where Paula was a terrible dinner guest!

A source explained to National Enquirer, “Bruno had invited Paula and TV correspondent Terri Seymour to join him for dinner, but within 10 minutes of being seated, Paula spotted someone she knew across the room—and ran over to say hello. Spotting yet another pal, Paula table-hopped encore. Then she went back to their table but only long enough to order, quickly running off to greet someone else—and was still socializing when her meal was served. Outraged, Bruno told the waiter to tell Paula her food was getting cold. She zipped back, but furious Bruno snapped: ‘Paula, please decide if you’re eating with us or not, because you getting up and down is ruining my dinner!’”

Apparently Paula apologized to Bruno and stayed put, but it did nothing to pacify the angry diner! Bruno was silent for the rest of the meal and left Paula and Terri to chat awkwardly. Now, we know that Paula is a bit of a ditz and doesn’t often think of how her actions affect others, but this breaks all rules of polite dining! It sounds like it may have been a working dinner too, so why would Paula keep ditching Bruno? We think that this has changed Bruno’s opinion of Paula, and if Carrie does get the boot, she won’t be replaced by the former American Idol judge! What do you think of Paula’s behavior? Can she still get signed on as judge, or did she blow it?