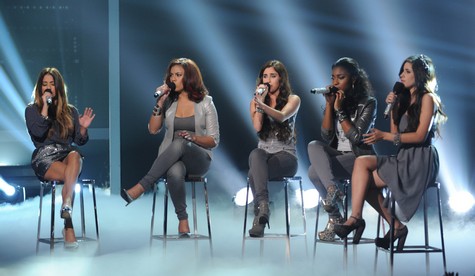 Fifth Harmony took the stage tonight on THE X FACTOR USA for their Final 4 video performance.  Fifth Harmony sang “Impossible”  by Shontelle for the song Simon and Fifth Harmony chose as their second song.  Tonight’s show the finale 4 performed live in front of coaches Simon Cowell, Britney Spears, Demi Lovato and AJ Reid for America’s vote and to make it another week.  Did you watch tonight’s performance show?  We did and we recapped it here for you.

Judges comments: LA thought the song choice was a little lazy because they have done it before.  He thinks they did a decent job, but he is not so sure it was a good song. Britney thought it was pretty good, but will be surprised if they are here next week.  Demi thinks the hard thing about being an underdog is they don’t have a lot of support from the judges table, it is all going to come down to their fan base.  Simon thinks it was the right thing to do the song because it was a reminder why he fell in love with them as a group.  He thinks they have been one of the strongest acts tonight.  He hopes and prays America keeps them around.

The chose their a song they originally sang at Simon’s home.  If you want them to stick around for the Finale you have to vote for them.  Vote for Fifth Harmony at 1-855-THE-XF-04