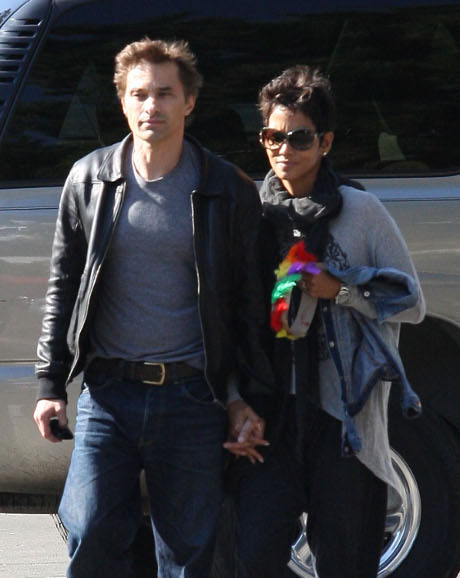 Today was just the first of what will likely be many days in court over the brutal Thanksgiving beat down between Halle Berry’s ex Gabriel Aubry and current fiancé Olivier Martinez. When Gabriel dropped daughter Nahla Aubry back off at Halle’s house, he was brutally beaten by Martinez, yet somehow ended up being the one arrested. He may have lost that battle, but round two went to him in court today when he regained access to his daughter.

After the Thanksgiving day “fight” between the two men, Halle put feet down to get a restraining order to keep Aubry away from her, Martinez, and poor little Nahla. The thing about a restraining order is, they’re not awfully hard to get – you come in, you cough up $350, tell your story and you can get a temporary restraining order easily. It’s not as easy to get a permanent one, but this feels like she’s back to trying to refuel the fire for her to be allowed to move to France with Aubry’s daughter in tow.

Aubry scored a victory today and it seems as if the TRO won’t apply to his visitation with daughter Nahla. At the emergency hearing today, the judge said, “Gabriel Aubry will be allowed to resume visitation with Nahla, with unspecified precautions in place to protect her safety.”

It sounds to me like one of those precautions should be Halle getting a leash on her fiancé! Aubry in turn has applied for a TRO against his attacked Martinez and it’s been granted. But seems that Aubry’s ready to take it a step further and wants Martinez banned from contact with his and Halle’s daughter Nahla as well.

And if what Aubry asserts in his TRO against Martinez is true, I agree that he should be kept away from little Nahla. Aubry told the court that when he pulled up to drop Nahla off, instead of the nanny out front it was Martinez and said, “I remember thinking that is was odd for [Olivier] to be there, as he is generally not present during custody transition. Nahla was in the backseat on the passenger side, and suddenly exclaimed, ‘Olivier is here. I’m scared.’ I recall thinking it was strange for Nahla to have said that and was concerned by it. I saw Miriam (nanny/houskeeper) then come outside towards my car, at which point Nahla became visibly upset and anxious, but I did not know why. I tried to reassure and calm Nahla and told her it was ok.”

Turns out it was far from okay. After Aubry handed Nahla off, he says Martinez approached him saying, “We need to talk.” Aubry says he turned to walk back to his car, but Halle’s fiancé followed and then attacked him brutally. Aubry says he was knocked to the ground and savagely beaten. He says Martinez was screaming at him that the custody battle had cost them $3 million as he pounded his head on the concrete.

Since Halle’s worth about $50 million more than her French lover, I can’t imagine he footed the bill for any of it. I also wonder whether Halle ran first to get the restraining order against Aubry or ran first to delete the security footage that may have recorded the attack. Aubry asked police to retrieve the footage before Halle or Martinez destroyed the evidence and they reportedly returned to Halle’s home, but no word yet on whether they secured the footage.

Now why would Aubry suggest they go get evidence that would incriminate him? Simply, he wouldn’t. I’m completely certain the physical part of the assault went down exactly the way he said. Who knows what words were exchanged, but I can’t imagine any utterance that would result in the brutal beating Aubrey received.

In photos, you clearly see Aubry’s right eye is blackened and swollen completely shut. His left eye is also damaged. His lip is split in two places, there are cuts on his forehead and nose. He’s reported to have a broken rib and a head injury as well.

What’s most telling, though, are the photos of both of his hands. They are pristine – looks like he just came from a manicure. If he had just been in a fist fight, he would have swollen knuckles, some scrapes or some other sign of hitting something. But he doesn’t. Why? Because as he says, he was the victim in this situation and Halle is aggravating the assault by trying to block him from his daughter.

In contrast, photos of Olivier’s hands show both are severely swollen with damage to the knuckles clearly indicating he’s been hitting something (more specifically, someone). Newer photos posted today show him sporting a wrist brace with extensive bandages on his hands. Tell me this? How hard do you have to beat someone to damage yourself to that extent administering the beating?

Aubry also said in his statement that Olivier told him they were taking Nahla to Paris and if he didn’t allow it, he would kill him. He added that his attacker said, “We called the cops and you’re going to tell them that you’re the one who attacked me, or I’m going to kill you.”

With two death threats delivered alongside a brutal attack, I’m absolutely appalled that Aubry was arrested rather than Martinez. Halle’s fiancé should be facing assault, perhaps even charges of attempted murder!

Before Olivier was an actor, he was a professional welterweight boxer in France. He left boxing because he found he could make more money on the screen than in the ring. Back in 2008, Martinez said, “I wanted to be a boxer because I thought that’s how I could make money. But I found a better way. With acting you can do it for much longer.”

Here’s a man who knows how to beat someone, who was paid to beat people for a living and is obviously comfortable with a certain level of violence. Martinez showed his true colors when he attacked Aubry – a man whose athletic skills extend to the 100% non-violent sport of golf. This whole situation sickens me.

Earlier this month, Halle lost out on her bid to try to take Nahla away from Aubry and move to France with the obviously unhinged Martinez. Their loss in court obviously sparked this attack. My question is was it pre-meditated and was Halle in on it? It would be the perfect evidence to take back to family court to try again to get approval for a move out of the country.

And if what Aubry says is true in his TRO statement that while Martinez was beating him, he told him that they’d called the police, that tells you that it was a set-up. Did he pause in the beating to dial 911? Did Halle call out to him that she’d called the po-po? If not, it was all a soap opera worthy plan to steal Aubry’s child from him.

The two victims I clearly see here are Nahla, who no doubt wants her father in her life and Aubry who’s been fighting for his daughter for years now. Tell me he doesn’t love that child – he would have given up long ago if he didn’t. He doesn’t have near the assets Halle and Olivier do to wage a custody battle, but he hasn’t given up. Good for him.

What’s truly awful is that his little girl will have to see him battered up and I’m sure she knows it was her step-father-to-be that attacked and hurt her Daddy. That’s just horrible. What is wrong with Halle Berry? Hollywood is full of divorced couples amicably sharing their children.

Why would she try to hurt her daughter by trying to steal her away from her Daddy? Why would she condone a brutal attack on a man she once loved and who is the father of her child? How will little Nahla recover from this trauma?

The whole ordeal is sickening and Halle Barry and Olivier Martinez are the villains in this family drama… I hope the police got the security footage and the world gets to see what a savage her fiancé is and I hope the court hands sole custody to Aubry. Then Halle can go live in France or anywhere else she wants with her violent lover!

Please share your thoughts with us below and stay tuned to Celeb Dirty Laundry for more on this ugly affair as it plays out. Our thoughts are with Gabriel Aubry – we wish him a speedy recovery and hope he gets to see his daughter Nahla very soon. What do you think of the Gabriel Aubry/Olivier Martinez fight that started this whole mess?