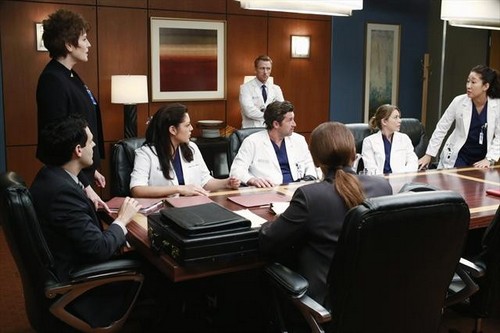 Tonight on ABC is an all new episode of GREY’S ANATOMY. Tonight’s show is called “Second Chance” and the doctors are faced with a tough decision as they move forward with the crash lawsuit. If you missed last week’s episode we have a full and detailed recap here for you.

On last week’s show another traumatic accident occurred, which left a patient in a disastrous condition. After a car ran over a civilian, Dr. Grey began one of the most stressful cases of her career. But, as she worked to save this woman, who was holding on by a thread, she was getting in over her head — and letting her emotions cloud her judgment.   On what was a  Meredith & Cristina-centric episode, the two friends continued to cope with life after the plane crash and their ever-growing responsibilities at their respective hospitals. As Meredith juggled taking care of Zola with a case that hit close to home, Cristina assisted Dr. Thomas on a challenging heart surgery.

On tonight’s show as the doctors continue with their lawsuit, they’re forced to confront the realities of their injuries. Meanwhile, Bailey tricks Arizona into helping her with a pediatric case, and Cristina tries to find normalcy in her new environment

Tonight’s episode looks like it is going to be a great episode and you won’t want to miss it, so be sure to tune in for our live coverage of ABC’s “Grey’s Anatomy” Season 9 episode 6 at 9 PM EST! While you wait for our recap hit the comments and let us know what you think of Grey’s Anatomy season 9, so far? While you wait for the recap check out a few pics of tonight’s episode below.

We open with Meredith on the phone telling Derek that she’s not sure if Cristina’s staying in Seattle. Callie tells Miranda that they’ve got to meet with the plane crash lawyers again that day. Meredith is annoyed with Alex for asking her to make improvements to her house before he’ll buy it. He tells her it’s just business. Jackson and April are back in the sack again and she’s regretting it again…

A mystery patient in the ER – a teen who looks jaundiced is moaning in pain and a hunk of his hair comes off in Meredith’s hands. They’re flummoxed. Also in the ER is a homeless guy they call Santa Claus who keeps coming in and barfing on them. He tells Morgan he’s not been drinking but then he barfs on her. She promises she’ll find what’s wrong.

Miranda tells a mom she has to keep her daughter for more testing after her appendectomy. Arizona takes a call from Miranda who describes the child’s case and says she needs her help. She tells her she’s busy and not back to work. Miranda asks if she can send an intern over with a copy of the chart and Arizona agrees.

Jackson pulls Richard aside and tells him that he got an email from him that was way too personal and sexual. Richard apologizes and is flustered. Meredith is scaring Stephanie and Cristina’s jealous because she wants to be the scariest.

The residents find out that Cristina’s back for good – Owen made her a good offer – but tells her he won’t be her proxy in the plane crash lawyer meeting. They tease April about Jackson and she’s aggravated. Leah and Morgan chat about sex with Alex – seems like he’s been with all the interns. Meredith and Alex discuss that the teen’s liver is in trouble and are upset.

Cristina comes to see her new cardio boss who blows her off. He tells her to take care of the interns and run his service. He gives her authority and autonomy but she seems annoyed not to be getting guidance. But knowing Christina, she would have bristled if he had tried to play boss – she’s never happy.

In the plane crash meeting, they want the doctors talk about their pain and suffering as a result from the crash so they can figure out how much they can get in damages from the suit. Cristina says she’s got no residual issues and she bails out. Meredith is upset that the lawyers want to include the pilot in the suit – because he broke his back they feel bad. Their lawyers tell them to toughen up.

Cristina is terrorizing the cardio interns – she gives them all dwarf names and they decide they hate her.

Meredith and Alex tell the teen’s parents that he’s got a failing liver and needs immediate and serious medical care. They say his problems are consistent with steroid abuse. He gets angry and his parents are shocked because he’s a brainiac, not an athlete. Alex asks Brian (the teen) how long he’s been taking them and his mom says it’s been two years because that’s when he started changing.

Owen asks Morgan about Santa and she tells him that there’s no alcohol or drugs in his system. He tells her to “treat him and street him.” Owen says to give him some anti-nauseate and kick him out. She goes to tell Santa and he tells her he’s freezing.

April confronts Jackson about walking out without giving her any respect. He tells her she doesn’t respect him – that she compared him to a fatal car wreck. She compares him to a tempting, fatty dessert that she can’t resist but then gives you horrible guilt afterward. She tells him Jesus is disappointed in her for continuing to have sex with her.

Arizona calls to ask if the intern was bringing the chart and Miranda said they left it by the door. I’m sure Miranda did that on purpose to force Arizona to get out of bed.

Back in the plane crash meeting, they start discussing the failed surgery on Derek’s hand. Callie doesn’t want to admit that her surgery went bad, but they encourage her to be honest to increase the award. Callie admits she doesn’t think Derek will ever operate again.

Arizona pops on her new leg and struggles her way to the door to get the chart. She falls and shatters a vase at the halfway point, but gets back up. She makes it to the door. Yippee!! Go Arizona. I hate to say that I hope the girl has an interesting complication, but I hope she does so that Arizona will get off her duff and go into the hospital.

Ha! The chart wasn’t there – Miranda didn’t send it – she’s luring Arizona in – good job Miranda! Cristina is chased down by the lawyer and she admits she had some PTSD and residual shoulder pain. She bails on the lawyer when one of the cardiac patients starts barfing blood.

Alex and Mer are in surgery working on Brian and debate the work he wants her to do on the house. She wants to know his rush and he tells her he’s been sleeping with too many interns. He told her he needs a place of his own. She tells him he’s dumb and sad.

Jackson confronts Richard again because his mother replied to the email he had forwarded and he got a sexy email in return. He tells them to keep his email address out of their love lives.

Owen confronts Morgan because she ordered an abdominal CT on Santa. She shaved him and cleaned him up and Owen didn’t know who he was. He accuses her of giving him an extreme makeover and she says poor people don’t get good care because of how they look. He concedes.

Callie chastises Derek because he pushed them not to settle and now they’re all dealing with lawyer pain. She’s also angry because she felt like he pushed her to do the surgery. He gets pissy and says he only insisted because he thought she could do it – burn! Those two are not happy campers!

Arizona is pacing around – pacing!!! – while she leaves a message for Miranda demanding the chart. In surgery, Cristina’s grilling the interns and pushing them hard. They are thrilled to have her even though she’s been tough.

Meredith and Alex are waiting on test results and they come in – Brian has cancer. They tell his parents they were able to cut out all of the cancer, but it could come back if he starts abusing steroids again. His folks tell the docs he was perfect – she’s plagued with guilt because she didn’t know and couldn’t stop him.

Santa barfs on Morgan again but figures out he’s got migraines. Alex tells Morgan to change her shirt and she screams at him. She tells him to call Leah because it’s driving her crazy. She also tells him about Santa’s symptoms.

Owen comes screaming at Cristina for the emergency surgery and tells her she’s likely to get fired for not checking with him before she cut into his patient.

Miranda warns Callie that she was pushing Arizona and then they see her walking in slowly. Miranda shoos Callie away and tells her Arizona’s like a little bird. Arizona checks the chart and diagnoses it easily. Miranda coaxes her to stay and run tests to “show her” what needs to be done. Go Dr. Bailey! She rocks – she’s such a fixer. Love, love, love her!!

Jackson asks Richard again if they’ve cleared up the email situation. Richard wants to know why he’s been acting as a go-between and tells Jackson that he thinks he’s actually happy that they’re together. Snap! He nailed that.

Alex figures out what’s wrong with Santa. He tells him they can treat the migraines – they give him a stack of meds and tell him they’re setting him up with a primary care doctor for ongoing care. Alex credits Morgan completely and Santa offers to hug her except that she’s all pukey! Ha!

Owen calls Cristina in to discuss the heart surgery and tells her she’ll be lucky to keep her job. Instead of being angry, her new boss thanks her and tells her good job and tells Owen that he knows why he pushed so hard for him to hire her. Wow! He still loves her!!

Callie tells the lawyers that she thinks Derek can operate again – that nerves take time to regrow and she’s got lots of other ideas to try.

April and Jackson have a little confab and he tells her that it’s not just sex to him. He tells her he has lots of feelings about her. He’s all teary. She apologizes. Aww.. He loves her…

Alex is moping because Arizona told him he’s nothing and has nothing. He tells Mer he really needs the house. She tells him all the scars on the house are due to good things. She says it’s fine the way it is and that he’s fine the way he is. They shake and hug on it and he asks her about the dry rot. She slaps him.

Cristina and the gang tell them they don’t want to include the pilot in the lawsuit. They tell him that it’s only part of the investigation. The lawyers ask Owen to step out and then they reveal they’re rally planning on going after Seattle Grace for putting them on the plane.

Alex walks into the house and finds Cristina there. She asks him to rent her a room and he says no. Then he recants and invites her to stay. He tells her she has to buy the toilet paper. Mer’s narration closes with “We find ourselves exactly where we belong.”