Is Maggie Smith Leaving ‘Downton Abbey’ Or Not? 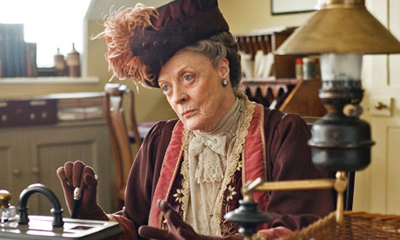 Aside from the romance between Michelle Dockery and Dan Stevens‘ characters, Maggie Smith‘s Dowager Countess is the best thing about our new favorite TV show Downton Abbey, so we were shocked to learn that the 77-year-old actress is rumored to be leaving the hit Masterpiece Classic show next season.

According to TVEquals.com, Maggie reportedly asked the show’s creator Jullian Fellowes to write her character off the show. (Does that mean the Countess might move to America, or heaven forbid, pass away?)

However, a spokesperson for the company that produces the series has reportedly dismissed the claim, stating that “we never comment on future story lines but it’s not true that she’s leaving.”

So, which report should we believe? We really hope the latter one proves to be true because we’re not sure we want to watch a Downton Abbey without the Countess’ hilarious, one-off lines and facial expressions. Related: Spoilers For Downton Abbey Season 3: Two Weddings, Bates In Prison, And Shirley MacLaine