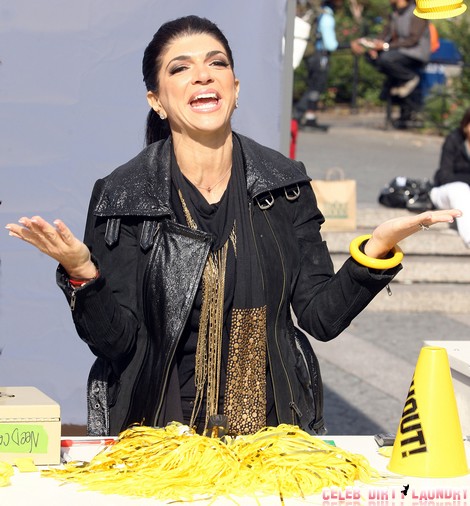 One thing is for sure after last night’s episode of The Real Housewive’s of New Jersey, Teresa Giudice really has no friends left!   Finally the big pink elephant in the room was addressed and it was so ugly that all Joe Giudice could do was book a flight to get his wife out of there. No defending her, no fighting for her, he just scooped her up and said, “Let’s go.”

At the root of all the drama is the solid belief on the parts of Caroline Manzo, Jacqueline Laurito and Kathy Waikile that Teresa has sold stories and lies about them to the tabloids. Teresa swears up and down that she doesn’t get paid for the “lies” they print and at this point absolutely no one believes her. As she and the girls are having a screaming match in one room, the husbands are in the next room having the same chat. Chris Laurito mentions that his wife was offered 50 grand to talk to the press and she turned it down because that’s what friends do. Joe Giudice is appalled that she didn’t take the money and talk, like his wife does!  So as Teresa swore her innocence in one room, her husband was confirming in the next that she’s a liar!

The girls were having none of Teresa’s lies and she went from screaming to inconsolable.  The pathological lies weren’t working on this particular night and Teresa had no idea how to handle being faced with the truth, that at this point in time she’s a lying piece of trash just like her husband.  He literally dragged her back to their room and made her get dressed so that they could catch a last minute flight back to Jersey. Teresa’s brother Joe Gorga and his wife, Melissa Gorga went with them out of family loyalty, but Melissa is smart and already told Caroline that she knows what the truth is.  She intends to continue her good relationship with both Caroline and Kathy, which is probably wise given all the bad blood in the past between her and Teresa.  If Caroline starts to tell Melissa the bad things that Teresa has said about her, their truce will be off and the claws will reappear.

I wonder what Teresa’s reaction will be upon viewing last night’s show and seeing how her husband confirmed that every accusation made against her was in fact the truth.  Did you tune in last night?  What did you think of the hour long cat fight?  Tell us your thoughts in the comments below!