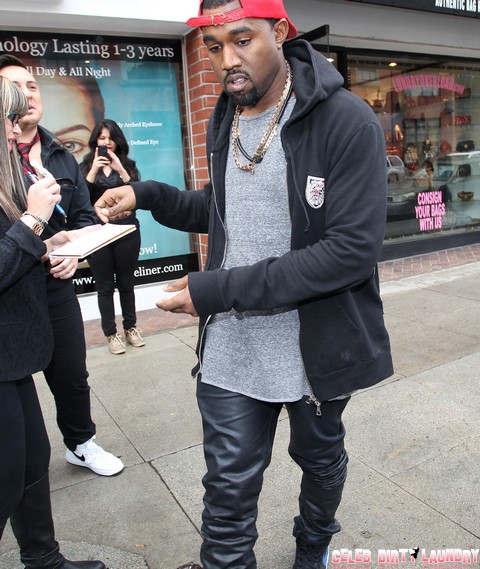 Kanye West is at it again. Kanye was phoning in a half-assed version of Clique when he paused for a tirade. He ranted on such socially relevant topics as where his fashion line was shown, what reviews it received and other timely topics that impact most of the community he was aiming his comments at – minorities. Despite the inanity (and vulgarity) of his comments, you could hear the crowd (mostly women) shouting “We love you Kanye.“

Well, Kanye doesn’t love you sisters – he loves his Armenian bubble-butted baby mama Kim Kardashian. Not sure what level of street cred she’s got – but I’m guessing it’s pretty low. Kayne ranted about how the press and media “come up with all the dumbest sh*t in the world to distract ya’ll.” Is he griping about the paparazzi coverage of he and Kim or is it a bigger plot afoot? He never elaborates or clarifies.

He tells the crowd that “people say Kanye’s crazy!” Who says that? I haven’t heard that. I heard it a bunch when he snatched the microphone away from Taylor Swift at the MTV Awards and said Beyonce should have bested Taylor. Actually, it wasn’t people calling him crazy – I think it was more along the lines of a**hole and d-bag.

And how big of a jerk are you when the President of the United States – a minority president at that – calls you out by name? Obama said to CNBC at the time, “The young lady seems like a perfectly nice person. She’s getting her award. What’s he doing up there? He’s a jackass.“

I digress… Kanye continued his rant saying, “I ain’t crazy – I’m just not satisfied. I just ain’t satisfied.” I see how his life is tragic. OMG. Poor Kanye. He’s rich – super rich in fact. He’s got a super hot girlfriend that’s supposedly incubating a mini-Kanye, he’s BFF’s with Jay-Z, he’s been adopted by the Kardashian klan and can pretty much write his own ticket. I can totally see how life isn’t satisfying.

Kanye then criticizes, “The sh*t they be feeding ya’ll on TV.” I wonder if he’s referring to sh*t like Keeping up with the Kardashians? I agree Kanye, that is sh*t. And there’s more heaping, steaming servings of it on E! than ever. And now that Kanye’s a recurring cast member, isn’t he one of the chefs that’s serving up the crap on TV?

And then Kanye’s rant gets really relevant to the crowd. He says people asked him: “Why did you show your collection in Paris? Well aint’ that the best place to show it?”Then he gets to the real heart of the matter – here’s what’s really eating at Kanye… The Grammys! He said, “Fresh Prince was the first ni**a to win a grammy.” You know what, I have never heard Will Smith on a rant about his life or  being unsatisfied. Quit whining Kanye!

Then he goes on to say he’s won “18 grammys.. all in the black categories though.” Okay, Kanye. Let’s get this straight – you’re aggrieved because you’ve won Grammys in the categories of music you perform? Have you recorded a comedy album? Country? Gospel? Children’s? Poor, poor Kanye. Life has not been fair to this young man. I have a reservation under the name Kanye West for a pity party of one…

Then he starts naming names and says, “I love Maroon 5, but when I lost best new artist to Maroon 5…” Don’t you think that everyone that loses best new artist is pissed off? But that doesn’t mean it’s a plot against your personally. Britney Spears didn’t look too happy when Christina Aguilera won it, but she didn’t go off on a rant. Not right away anyway – maybe that’s what the head shaving stunt was about – sour grapes from losing best new artist…

Kanye whines, “So don’t expect to see me at the Grammys this year!” What a total cry baby – at last year’s Grammys he walked away with a handful of trophies and that made him one of the most celebrated artists of all time. Poor, poor Kanye. By all means, stay home. And if you win anything, I hope Taylor Swift can be there to accept on your behalf.

But come on – Kanye’s got six nominations this year – there’s no way he’s going to stay home. And there’s no way Kim Kardashian is going to miss a chance to be on the Grammy red carpet and get some quality camera time that will air somewhere other than E! If Kanye is unsatisfied, maybe it’s Kim’s fault. Think he’d “kash” her in if he could go back and get that Best New Artist Grammy from Maroon 5. I think he would – in a heartbeat…

The summation of Kanye’s latest epic meltdown is this: F-bombs galore. Self-pity galore. Waah. Waah. Why wasn’t my album nominated for record of the year? Waah. Waah. Poor me. And to this, I say: Get a grip, Kanye. Put on your big boy pants and quit being such a whiner. The country’s heading off a fiscal cliff, little children were gunned down at an elementary school, our embassy in Libya got blown up and your little life is rough? Sniffle. Sniffle. Obama was right, what a jackass!