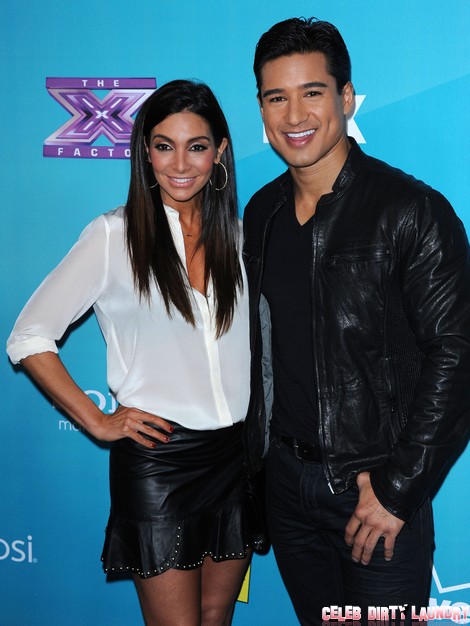 Well this is rich! Despite Khloe Kardashian’s failing marriage (which at this point seems to be held together only to promote sales of her new fragrance Unbreakable Joy, the advertising for which features her and husband Lamar Odom), the new host of The X Factor USA couldn’t help but offer some words of wisdom to cohost Mario Lopez, who is getting married in Mexico this weekend with longtime girlfriend Courtney Mazza. A destination wedding may sound romantic, but the entire thing will be filmed for a TLC TV special.

Khloe opened up to People Magazine about what the hosts do backstage. “We talk during rehearsals and commercial breaks, and he’s like ‘What time did you cut the cake?’ I’m like, ‘I don’t know. I was so wasted at my wedding.’” So romantic! And Mario is being silly—he’s just a warm body at his wedding. The TLC cameramen and producers will have everything staged and timed. All he needs to do is smile. And the only advice Khloe should be offering is what not to do—no reality TV shows, no accidental nude pictures posted to Twitter, and absolutely no cameras or cameramen from E! News in the bedroom recording sex and foreplay. (Which totally happened on Keeping Up With The Kardashians! Remember when she tried to install a sex swing by herself and then they broke it?)

Unfortunately, Khloe has double doomed Mario’s marriage by forcing her own special brand of wisdom upon him. “You and your partner should take a few minutes to yourselves and just watch the whole thing from the audience. Lamar and I will now talk about these little moments, because you get pulled away from each other. You shouldn’t spend your whole wedding not with each other.” Which I read as “start the codependency early on. If he’s not by my side, I can’t feel the sun upon my face.” Mario and Courtney don’t need to take little moments, because the entire thing will be recorded by a dozen cameramen! What do you think of Khloe’s marriage counseling?