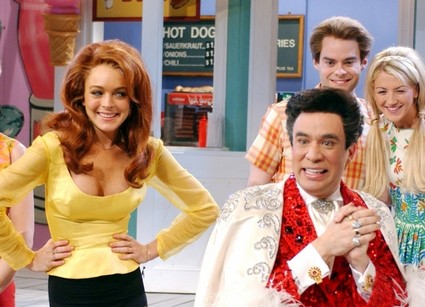 Last night’s episode of Saturday Night Live featured my fave celeb Lindsay Lohan and musical guest Jack White. She walked out on stage sporting a blue crayon colored dress, and a pair of blue shoes to match. Her monologue was quite funny and, despite what people say about my hot-mess-of-a-friend (okay, I wish she was my friend), she does have some acting talent — she’s just struggling to relocate it. She was a great sport and welcomed jokes, including a pat down by Kristen Wiig, that commented on her bad-girl past.

As always, not all the skits were winners, but they were entertaining:  “The Real Housewives of Disney” featured all the woman of the cast, as well as LiLo, who played Rapunzel.  “The 2012 Psychic Awards” was extremely stupid . . . which means: I loved it and laughed extremely hard.  “The Jail Skit”  featured LiLo as herself and capitalized on her infamous history with the law.

“Late Movie Night on Channel 7” . . . featured several of the cast members alongside LiLo depicting characters from the 70s.

“Paranoid Woman” featured MY FAVORITE Kristen Wiig as a paranoid lady who would freak out every time the phone rang. This was probably one of Lindsay’s best skits and Kristen was, as always, hilarious.

“Rude Buddha” featured Andy Samberg.  Overall, I feel as if the writing has gone downhill on SNL, but LiLo did well with what she was given. She didn’t have extremely LARGE parts and seemed to be heavily carried by her costars.

Despite her very noticeable teleprompter reading, her acting was admirable, especially after being out of the game for a while. I know many of my colleagues and peers will have (or had) negative reviews of Lindsay’s performance, but she needs our support and encouragement right now! She definitely wasn’t the best host we’ve seen, but she seemed sincere in her attempts to bring a positive energy to the show.

Stay on the straight path, LiLo! You’re off to a good start. You’re not quite all the way back in the game yet, but CDL has faith that you can get there soon. I don’t know if I can handle another one of your breakdowns . . . so BE GOOD for us! Please, for the love of all things celebrity, BE GOOD.

If you watched SNL last night, what did you think of Lindsay’s performance?