Maroon 5 and Adam Levine On SNL Last Night – The Best Pop Band Of The Decade? (Video) 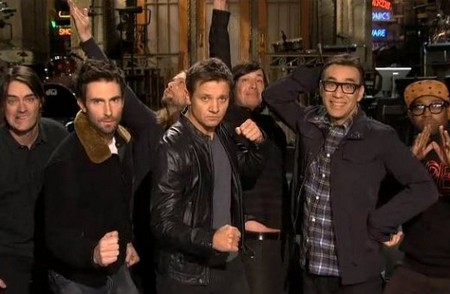 Adam Levine has come a long way in the music industry. His peculiar vocals and relatable lyrics have forced the music industry to reconsider what “good vocals” sound like, plus there’s no denying that Levine’s perfectionism in his art has brought his career to the uppermost heights of fame. Maroon 5’s first single, Harder to Breathe, hit the airwaves in 2004 and carved Levine’s path to stardom. He became a well-known face on the music circuit, collaborated with some of the biggest names in the industry, and released one hit after another. He is the very fiber that makes Maroon 5 one of the most successful pop bands in recent history.

Levine’s jump to reality television judging only further cemented his popularity and appeal. In April of 2011, Levine appeared as a permanent judge on the Mark Burnett-produced NBC phenomenon, The Voice. His appearance on the show’s first season not only silenced his detractors, but also gave birth to a menagerie of new fans. His regular fallouts with Christina Aguilera and his ear for excellent vocals pushed him into the stratosphere of reality television judging, and made him one of the most popular judges on any reality TV talent show, even surpassing the likes of Britney Spears (X-Factor) and Jennifer Lopez (ex-American Idol judge).

Maroon 5’s latest single, One More Night, became the band’s most successful single to date, after it spent nine consecutive weeks at number one on the Billboard Hot 100 charts. The single also exploded on the charts in Australia, New Zealand, Belarus, Bulgaria, Finland, South Africa, and South Korea. The song was not only a commercial success, but also a critical one. Ricky Florino of Artist Direct wrote about the song, “Kicking off with a reggae-style guitar on ‘One More Night’, the album starts on a subtle yet sharp note. The push-and-pull of the tumultuous relationship described in the lyrics belies just how slick and swaggering the song’s hook is. Mickey Madden’s bass is tight and groovy, while James Valentine’s riffing reaches its most diverse and dynamic heights yet on this offering. Matt Flynn lays down some staggering beats, and PJ Morton’s keyboards color the soundscapes vibrantly. At the center of this instrumental majesty, Levine reaches another level reaching the status of legend alongside Bono and Anthony Kiedis, merging genres while effectively forging something fresh altogether.”

There’s no denying that Maroon 5’s presence in the music industry is growing larger and larger with every successful album and single release. Sorry baby pop artists, but if it’s getting harder and harder to breathe with Maroon 5’s presence, it only means that they’re so, so much better than you in every aspect of musicality.

Last night, on the farcical Saturday Night Live, Maroon 5 performed the One More Night mega hit to one of NBC’s biggest weekly audiences. Clad in salmon-coloured shirts and pants, the super popular band rocked the audience with Levine’s familiar vocals and purely perfectionist performance. You can watch them jam in the video below!