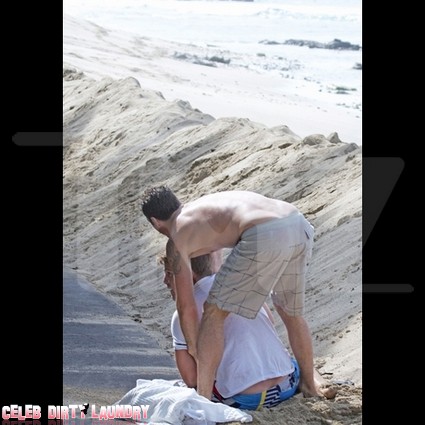 According to TMZ…Delbert will file a lawsuit in the LA County Superior Court this morning alleging an altercation took place in Hawaii last December. He was taking pictures of the former 90210 star and his Mrs in front of the Four Seasons Resort in Hualalai when the pair made verbal threats against him. Then things got a little heated with Megan reportedly yelling to her husband ‘Are you going to let him get away with that?‘ That’s when Brian allegedly laid into the snapper.

So what did Brian do? Shaw alleges he halued him off and pummeled him which caused severe injuries. Then the actor grabbed the photographer’s iPhone and threw it into the water. The papers detail how the actress was egging her husband on the whole time. Mr Shaw is suing for unspecified damages. Megan Fox and Brian Austin Green are yet to comment on the case.

Hawaii is a special place for the couple. They were holidaying in the spot where they’d previously tied the knot.  Now they’ll have a few other memories to remind them of the tropical paradise.

Of course run-ins with the paparazzi are nothing new for famous faces. For more check out Celeb Dirty Laundry‘s coverage of two recent incidents Russell Brand Posts Bail After Arrest Over Scuffle With Photographer and Justin Bieber Flips The Bird At Paparazzi In London