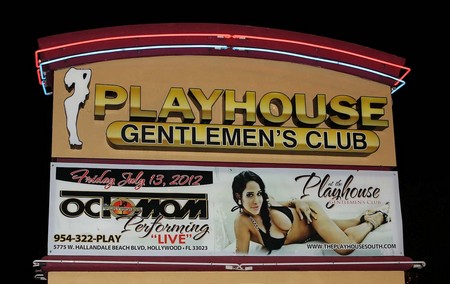 Octomom had some previous trouble with comments made by some of the staff at another strip joint in Florida. Last month Octomom’s representative, Gina Rodriguez, said that Octo was pulling of her contract at T’s Lounge in Palm Beach after employees there insulted her sensitive client.  I guess that folks at the Playhouse were able to keep their mouths shut.

TMZ reports and has pics as well: Octomom Nadya Suleman stripped down Friday night like it was her job … because it was … and TMZ has obtained the pics to prove it.

After months of anticipation, Octo finally had her first gig as a stripper and hit the stage at Playhouse Gentleman’s Club in Hallandale, FL for TWO WHOLE DANCES!!!

Even though her time on stage was short, the mother of 14 went all out — using costumes, props and we’re guessing a gym … cause girl didn’t look half-bad.

So now that Octo is doing her tour of duty as a stripper we wonder who is minding her children?  Let us know what think of all this in the comments below.