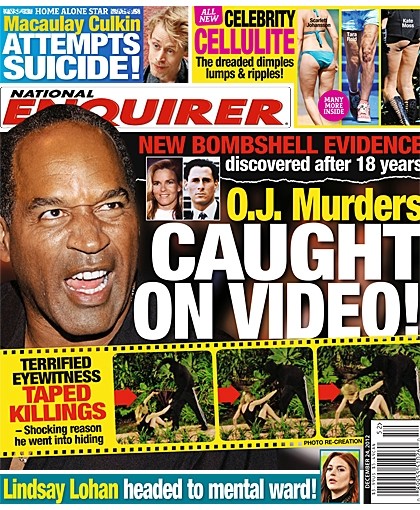 After 18 years we finally have more proof than a shrunken glove and some bloodied footprints. We have video! And we have the National Enquirer to thank for it.

The latest National Enquirer cover claims it has video from the alleged OJ Simpson murders of ex-wife Nicole Brown Simpson and her friend, Ronald Goldman. Has the Enquirer reached a new low or are you kinda interested? I’m not gonna lie, those front page pics have me intrigued. Oh wait, I just read the fine print and those crazy pics are “re-creations”. Why am I so easily fooled?! And why does this case continue to interest us? I guess for once and for all we all just want to know if he did it. I don’t think the Enquirer has a video and I’m sure it doesn’t show OJ Simpson stabbing his ex-wife for all to see. HOWEVER, what if there was a tape? What if it caught OJ Simpson in the act? How sensational would that be? I’ll definitely be flipping through as I wait in line for the grocery store. I’d like to think I’m above it but we all know I’m totally not.

In other Enquirer news, Macaulay Culkin attempted suicide. Poor Macaulay. He’s got such a bag rap going right now. Everyone thinks he’s hooked on heroin and Mila Kunis. It’s true he hasn’t been looking that great lately but I refuse to believe he would go to such lengths. But I’m a Macaulay apologist and believe in Kevin McCallister to the end – especially during the holidays. Why hasn’t TBS showed Home Alone yet? I’m going to need to check that out later. But seriously, Macaulay needs to get his shit together. It’s pretty bad when you make Demi Moore look healthy.

Also, Lindsay Lohan is heading to the mental ward. You see how that’s the last thing I’m talking about. It’s not because I don’t care. It’s because it’s overdue… and I don’t care.