Pregnant Snooki Wants To Be The Next Kourtney Kardashian 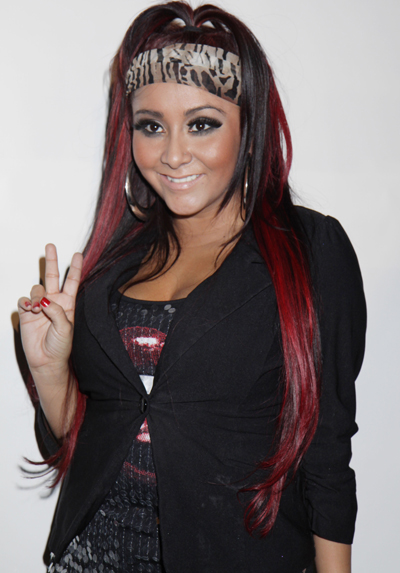 Brace yourselves, America! Jersey Shore‘s Snooki is pregnant and will reportedly give birth to a little guidette (or Snookiette?) later this year.

And rather than take some time off from all of the partying and primping that her “job” entails, Snooki aka Nicole Polizzi, is actually hoping to turn her pregnancy into a strategic career move.

According to Celebitchy.com, the 24-year-old, who is reportedly three months pregnant with her first child with boyfriend Jionni LaValle, has even identified a role model for her transition from a drunken hot mess to a pregnant hot mess: Ms. Kourtney Kardashian.

Supposedly, Snooki has already brokered a deal with a tabloid magazine to announce the news formally, just like Kourtney did last year when she announced her second pregnancy with Scott Disick. (Although the Keeping Up with the Kardashians star managed to keep the news under wraps beforehand.)

Snooki, on the other hand, is busy filming a Jersey Shore spin-off show for MTV and has already had to deny the rumors that she’s pregnant. Meanwhile, recent photos of her have shown her strategically trying to hide her stomach area with large bags. Related: Did Snooki Get Engaged On Valentine’s Day?

“I definitely do want kids, but I’m not pregnant . . . Being pregnant should be a real thing and a happy thing, and I’m not,” Snooki said on Feb. 2nd.

So, did Snooki lie during her Good Morning America interview about being pregnant in order to secure a big pay-day? If so, it certainly wouldn’t be the most shocking thing she’s ever said or done on TV.