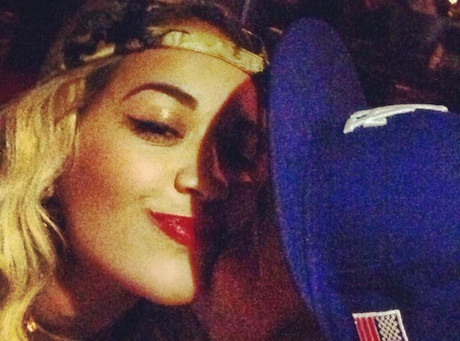 Well, it looks like the last Kardashian has finally found his own mega relationship. Rob Kardashian has now made it officially known that he is dating British popstar Rita Ora. And how did he let the masses in on this little tidbit? Via Twitter, of course! Rob posted two pics on the social media website of him and new girlfriend Ora getting mighty close. One shows Kardashian kissing Ora on the cheek with a cute caption underneath the photo simply stating: “Boo @ritaora.”

The other shows the couple cuddling on a street pavement.  Awwww!!! How sweet! Could this be true love for the youngest Kardashian? Or is this another ploy by the fame-hungry family to get Rob’s name in the papers just like his sisters? With Kim Kardashian dating uber-rap star Kanye West, Khloe Kardashian talking sex with whips and chains with basketball player Lamar Odom, and, finally, Kourtney Kardashian with the never-ending drama of baby daddy Scott Disick, Rob needed to do something to stop being referred to as the “lame duck” of the family. And what better way for a talent-less celebrity to get their name in people’s mouths? Date a hot popstar! (Or release a sextape, but I guess there can only be one in each family).

The pictures have been posted after months of denying the dating rumors, with having previously stated:

“He’s a great friend. But the only relationship I’m having now is with the tour bus.”

Well, either the tour bus lost, or Ora is cheating on Kardashian with a mobile object.

And now for the inevitable mash-up of celebrity couple names. We have Kimye and Khlomar, so it is only right for Rita and Rob to have one too. How about Rib? Or Robita? Hmmm…for some reason, their names just don’t fit together as nicely as everyone else’s do. I wonder if that is a sign . . . is this relationship doomed?

What do you guys think? Is this relationship for real? Or are they just playing boyfriend/girlfriend for the cameras and ratings? Take a look at the Rob Kardashian Rita Ora Twitter pic above and let us know your thoughts on the Rob Kardashian and Rita Ora couple announcement!