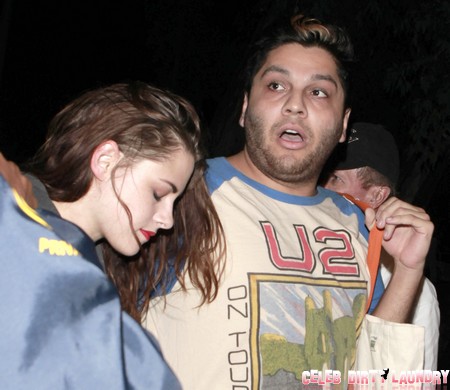 The embattled Kristen Stewart and the naïve Robert Pattinson will officially be reunited at The Twilight Saga: Breaking Dawn – Part 2 premiere in London on November 14. Are we buying this sudden Ryan O’ Neal/Ali MacGraw Love Story reunion? Not a chance. The cheapened Stewart and Pattinson relationship is a manufactured piece of cotton candy crafted by a clever marketing nerd at Summit Entertainment, the production company behind the Twilight franchise. Stewart without Pattinson is like Anthony without Cleopatra, like Humphrey Bogart without Ingrid Bergman in Casablanca, like Christmas without presents – and Twilight will definitely suffer as a consequence.

According to a latest e-book by Talia Soghomonian titled “Robert Pattinson, Kristen Stewart, Taylor Lautner – In Their Own Words”, Stewart opened up about being an endangered animal, “Nowadays, it’s harder because everyone is on Facebook and everyone knows where you are all the time, and everyone’s twittering. Like I’m going to die because somebody is going to say where I am and somebody is going to kill me. Someone’s going to Twitter my location and then it’s going to be like, boom.”

We’re not going to lie to you Kristen, but you’ve caused more drama during the past few months than an entire season of CSI – including the bad acting and the dead bodies. We doubt anyone is going to go Ted Bundy on your face, but you’re still not out of danger.  Summit Entertainment decided to keep Stewart and Pattinson apart for the duration of the promotional activities exactly because of this “danger”, once again cementing our previous assertions and assumptions – that this allegedly loving reunion is the biggest marketing gimmick since Justin Bieber’s “stolen laptop”. Pattinson and Lautner will do separate publicity tours and the group will meet up again at the European premiere of Twilight at the Odeon in Leicester Square.

Do you smell that? No, it’s not the smell of a decomposing Stewart in a paranoid serial killer’s basement; it’s the smell of smoke. Where is that damn fire? Oh no! It seems that the ambiguous reconciliation efforts are burning with a raging blaze! Don’t thank us for calling their bluff, just send us chocolates, kittens and tweet us Stewart’s location – we’d love to send some of Pattinson’s fans to kick her in her poker face.