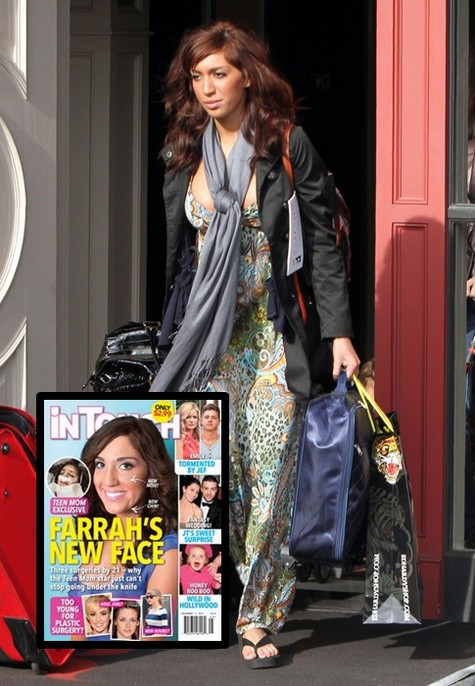 What is it with these Teen Mom girls?  Have you noticed that none of them really seems to end up doing things that you’d want to see your daughter do? Multiple pregnancies, drug and alcohol problems, domestic disputes, jail- the list is endless. This time around, Farrah Abraham is on the cover of In Touch Weekly talking about how after $21,000 in plastic surgery she finally feels beautiful!  The 21 year old recently had a rhinoplasty and chin implant, years after her much publicized boob job. She decided to sit down and chat with In touch about her insecurities saying,

“I’ve hated my nose since I was 13. I don’t have to hate anything on my face ever again,” she says. “I feel gorgeous! There was pain,” admits Farrah, although she insists she “wasn’t insecure” before the surgeries. “But it was very worth it.”

The double procedure was performed on Oct. 7 in Bal Harbour, Fla., by Dr. Michael Salzhauer and Farrah obviously seems thrilled with the results. But what makes an already attractive young girl think it’s a good idea to hack into her face? I’ve seen the photos and I actually think she may have even looked better before. Any difference is so slight that the money spent is ridiculous. The 21 grand would have been better spent on her daughters’ future education!

Do you think Farrah needed the surgery? This girl has had some serious issues with depression, drugs and a tense relationship with her mother. Is obsessing over her looks just an easier thing to fix rather than the real problems that surround her and her daughter?  Tell us your thoughts on Farrah’s surgeries in the comments below!