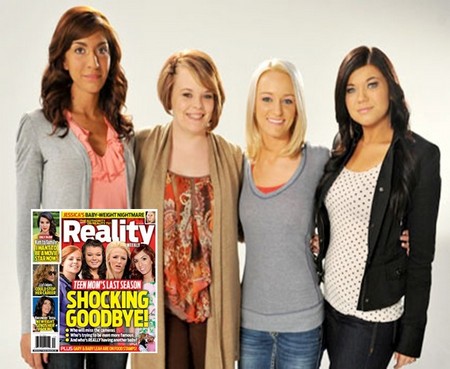 The lovely, upstanding women of Teen Mom, are ready to move on. Phew! Finally! We thought it would never end! Their drama is more outrageous than that nephew in your family who is a bit of a schizophrenic and believes Obama made him a ninja.

Maci Bookout who recently got into another fight with Kyle King, doesn’t want to fade into obscurity. Oh dear God what else does she want from life? According to Reality Weekly, her own bloody show!

“Maci would like her own talk show,” reveals an insider. “She has been talking to people at MTV because she wants to become an on-camera host. But she’s also really wrapped up in her love life.”  Okay, whatevs Maci.

What happened to the rest of the cast?

Amber Portwood returned to jail to serve out her five year sentence for drug possession. There she met a woman named Kris who meditated each night and sharpened a toothbrush in the morning while muttering, “Achilles heels are so 2009…” Her baby daddy Gary Shirley (dude, you seriously have a very odd last name) has custody over their daughter Leah and has had a tough time away from the cameras. The money from MTV has dried up like that shriveled mummy finger you found in Egypt, which turned out to be an antique condom.

Gary is reluctant to get a “normal job”. We would too after we saw our mug on all the national media outlets. A friend says, “He refuses to go back to the job he had before MTV, so baby Leah has to eat food bought with food stamps” As long as Leah doesn’t have to eat the food stamps, hey Gary?

Thank all the gods of hedonism that this show is finally over. We may now return to live an oblivious life, without the hassles of teenage mothers kicking our moral conscience in the face.