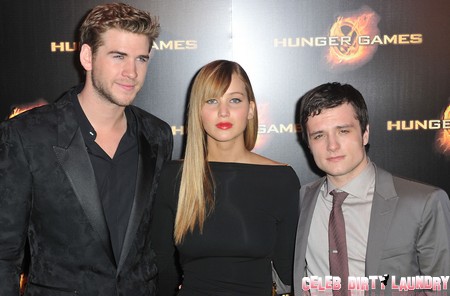 With Catching Fire, the second installment in The Hunger Games trilogy, set to begin shooting next month, two of the film’s stars are demanding more cash!

According toRadaronline and the Hollywood Reporter, Liam Hemsworth (who plays Gale) and Josh Hutcherson (who plays Peeta) are none to happy that their co-star Jennifer Lawrence will be getting a heftier paycheck than they this time around.

Despite the fact that Jen’s character Katniss Everdeen is the story’s main and central heroine, the boys don’t think it’s fair that she will be earning $10 million while they will only be getting closer to $2 million. That seems like a lot less to me, especially for Josh who shares most of the screen time with Jen.  So what gives?

“With the success of the first movie, they feel that $5 million is a more suitable fee and are haggling with the studio before dotting the i’s and crossing the t’s on their deals.

“And they have even said they may not return for the sequel, which they hope will be a bargaining chip for a bigger pay packet,”

Whoa!!!  They might not return??  You’ve got to be kidding me!  Surely this must have been prearranged prior to signing the dotted line – everyone and anyone knew this franchise would be wildly successful.  I’m sure their negotiators are playing hardball, because there’s no way producers can change Josh and Liam’s roles…or can they?