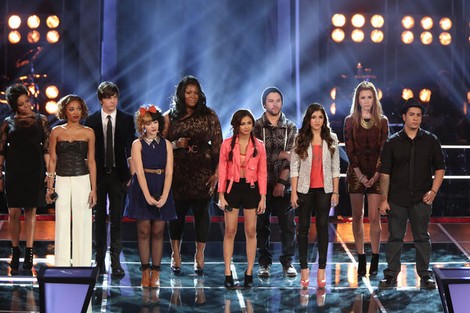 The artists will have no clue who they are up against until they are about to perform. Coaches will line their teams up on the stage and call out two artists to go head-to-head immediately. This time the competitors will pick their own song, one which they feel symbolizes who they are as an artist. Each singer will then perform for all of the coaches, while their opposing teammate watches from a stool in the ring. The coach then decides who earns the live show spot and the other artist is eliminated.

After viewing this trial to see if they have what it takes, America then will choose two artists to be saved for each coach’s team — and the coach will be allowed to choose one final singer to round out each team of three artists.

Tonight’s Part 2 of the Knockout Round  is going to be and exciting one, which you won’t want to miss. So be sure to tune in for our live coverage of NBC’s The Voice – tonight at 8PM EST!  While you wait for our recap, hit the comments and let us know how what you thought of last night’s episode of The Voice?

Tonight’s episode: Tonight the coaches have prepared their teams and the artists must deliver or they are going home. It’s the most important night of The Voice so far because at the end, each coach will have five artists on their team.

Team Christina calls her first Devyn DeLoera vs. Laura Vivas  are the first artists to battle it out. Devyn has chosen to sing “I Have Nothing” by Whitney Houston and Laura chooses “I Need To Know” by Marc Anthony.

Christina chooses Devyn even though she thinks Laura is a firecracker.

The next two artists to hit the battle stage are Adriana Louise and Celica Westbrook. Adriana is singing “Never Say Never” by Justin Bieber and Celica is singing “Already Gone” by Kelly Clarkson.

Judges Comments:  Blake thought both had their pitchy moments and both had their good moments. Christina is so proud of both of them but nerves is a issue for Adriana and she did good, she also liked the feistiness from Celica.

Alessandra Guercio and Dez Duron . Alessendra chooses “Take A Bow” by Rihanna and Dez chooses “Stuck On You” by Lionel Ritchie.

Judges Comments: Adam thinks both are clearly super talented, but he would choose Alessendra. Blake thinks it is battle of the heartthrobs.

Next, Chevonne vs. De’Borah will battle it out on stage. Chevonne chooses “Dancing With Myself” by Billy Idol and De’Borah “You Found Me” by Defrey

Judges Comments: Adam though Chevonne gave her best performance, but he thinks De’Borah did much better.

It’s time for Christina’s final battle round, Aquile vs. Sylvia Yacoub. Aquile chooses to sing “Grenade” by Michael Jackson and Sylvia chooses “Fighter” by Christina Aguilera. The winner of these two will be the final person heading to the finals on Christina’s team.

Christina thought they were ambitious songs, she chooses Sylvia.

Judges Comments: Christina says that she has a new found appreciation for country and she would pic Liz. Adam sees more potential with Grecia.

Judges Comments: Christina thought Rudy had an interesting song choice but hands down it was Terry for her. Cee Lo loved Rudy, but he was amazed by Terry. Adam wants Terry to go crazy far.

Time for another pairing, Blake chooses Collin McLoughlin  vs. Mikayla Paige. Collin is singing “I’m Falling To Pieces” by David Guetta and Mikayla is singing “Love Is A Battle Field” by Pat Benatar.

Judges Comments: Christina thinks Mikayla had a connection emotionally with the song and was genuine for her. Cee Lo thinks he would go with Mikayla. Adam is rooting for Collin because he never wanted to let him go.

Blake’s next knock out pairing is Julio Cesar Castillo vs. Marissa-Ann. Julio chooses to sing, “Somebody To Love” by Justin Bieber and Marissa-Ann sings “Lady Marmalade” by Christina Aguilera.

Judges Comments: Christina just loved to see Marissa-Ann sing a song that was a challenge to sing.

Blake chooses Julio (are you kidding me? Marissa-Ann killed it?).

It’s the last pairing for Blake, Cassidy Pope vs. Suzanna Sheffield. Cassidy chooses to sing “Payphone” by Maroon Five and Suzanna sings “Could The Be Love” by Bob Marley.

Judges Comments: Christina loved Suzanna, especially her song choice. Adam loves Cassidy and he was impressed with her version of his song.