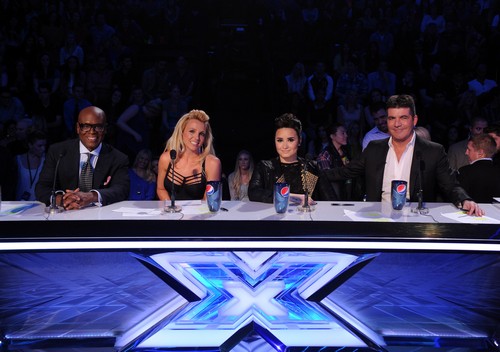 Tonight on FOX is an all new episode of THE X FACTOR USA Results Show. On tonight’s result show America will vote to eliminate two artists and the remaining six will move on to the next phase of the competition. Did you watch last night’s show? We did and we recapped it here for you! Did you miss any of the performances, if you did you can see all the video’s here.

Our favorite for the night was Carly Rose Sonenclar – Mentored by Britney Spears – Rolling in the Deep by Adele – There’s no doubt in our minds that Carly Rose will most probably win this entire competition. Her exquisite phrasing and handling of notes made this an epic performance. Yes, although the performance was slightly predictable, Carly Rose still blew the lid off of this one. OUR SCORE – 9 out of 10.

Two contestants will be eliminated tonight when the elite eight becomes the super six. Time is quickly running out for CeCe Frey and Paige Thomas, so we’re expecting both of them to be cut from the competition.  We conducted a poll today and there is still time to vote, GO HERE!  Our viewers are betting by 50.72% that CeCe will be gone, sadly one of my favorites Vino Alan follows with 19%.  I am hoping Vino does not go home.

Tonight on the results show we will see Grammy Award-winning R&B singer/songwriter Alicia Keys, and Josh Krajcik, a finalist on last season’s THE X FACTOR. Then, Khloé and Mario will announce the acts that made the cut in an all-new “Live Results” episode.

Stay tuned to Celeb Dirty Laundry for a full live recap of tonight’s Top 10 Results Show episode. We will keep you up to date on all X-Factor news, reviews and spoilers and make sure to check back here regularly for more information on your favorite television shows! So don’t forget to come back to this spot at 8:00 PM for our live recap of The X Factor’s live Results  Show to see who in the Top 8 will be going home.

Tonight’s episode: For two acts the dream of getting a recording contract is going to end tonight. Simon is praying it’s not one of his two, the act with the lowest number of votes and going home is Paige Thomas who ignored Demi’s advice completely this week, could that have caused her not to get the votes she needed?

One more act will soon be leaving with Paige, but first we are going to be entertained by some awesome guest performances. The first guest is Josh Krajcik, a finalist on last season’s THE X FACTOR singing “One Thing She Will Never Know” from his new EP.

The Pepsi Challenge is back next week, just go to Xfactorusa.com for more information.

Vino and Diamond have to sing to see who will move forward to the top six and who will go home. Britney introduces Diamond, she is the first to sing, then Vino who absolutely killed it with singing “Trouble”.

It’s time find out which act the mentors want to send home. LA loves both of them and is completely shocked at the bottom two but in the end, he wants to send home Diamond. Britney thinks both acts did a tremendous job, but she is sending home Vino. Demi’s turn, she thinks both are unbelievably talented but she sends home Vino. It’s time for Simon to vote, the act that he is sending home is Vino.

Wow, what a shocker. I can’t believe Vino is going home, he gave me chills when he sang “Trouble” and to be honest, I don’t even know what Diamond sang because it was that unmemorable and boring. What do you think about the eliminations? Sound off your comments below and let us know who you think should have been saved.