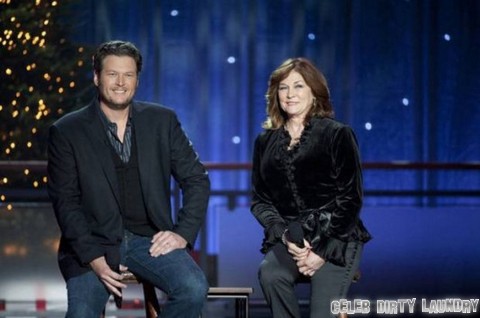 It looks like the battle between The Voice and American Idol isn’t just between networks and fans anymore. Blake Shelton’s mother, Dorothy Shackleford has taken to her Twitter to put in her two cents on the battle of the reality shows. She wasn’t pulling any punches in her opinions either as she took some direct shots at AI. She commented on how lost the kids seem and that no matter what they do it’s going to be wrong. As for her thoughts on Nicki Minaj, Dorothy was straight to the point Tweeting, “Nicki makes me throw up.”

Her reaction seems to be on par with a lot of former Idol viewers’ thoughts as the fading shows numbers have absolutely tanked this season. Even Duck Dynasty beat them in the ratings last week! Nicki has come out swinging saying, quite accurately, that if people weren’t slamming her for her Idol behavior then they wouldn’t be talking about the show at all.

As for The Voice, it has taken on a very country tone this season and Blake is making absolutely no apologies for that change. He believes that viewers are getting exactly what they’re asking for and when discussing the topic on Twitter he put it pretty bluntly saying,

“This year on The Voice we’re bringing country to the party! That’s right. Any critics that don’t like it can have a warm bowl of nut sack.”

Are you a fan of the country throw down going on over at The Voice? Are you wishing for a little more of a mix? I know lots of people love country music, but if you’re not one of them then this is really not the season to watch!

Do you think that AI is clearly winding down? Will they try an eek out one more season or should they just let it completely die after this season wraps? Tell us your thoughts in the comments below!