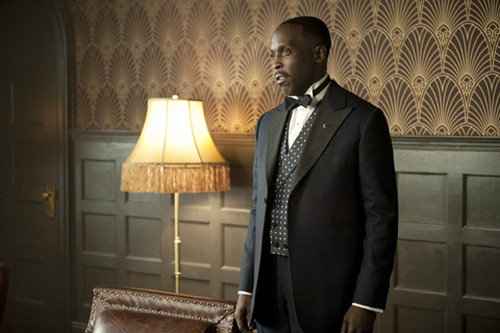 Tonight’s episode of BOARDWALK EMPIRE was excellent.  I thought last week’s episode was the best of the season, but I think tonight might have beat it.  The show is really heating up and hitting its stride, I cannot wait till next week. We have a sneak peek video and some insight for you below on what is going on next week episode called, “Marriage and Hunting” below.

On tonight’s episode Nucky’s shipment from Florida arrived will arrive with some unexpected cargo. Eli was backed into a corner when Agent Knox uncovered new dirt on the Thompsons in the way of Willie. After talking things over with Nucky, Willie reconsidered his recent life choices. Chalky threw down the gauntlet to Valentin Narcisse, upholding his leadership on the Northside.  Chalky discovered Dunn’s duplicity.  Lots happened on episode 8, many betrayals and if you want to find out we have a full and detailed recap, right here for you.

Spoiler alert: If you’re one of those people who doesn’t like spoilers, stop reading now! We have some juicy spoilers for you about the season 4 episode 9 of HBO’s “Boardwalk Empire”

Official HBO synopsis of next week’s episode: “Nucky is going to refuse to back Chalky in his conflict with Narcisse. Julia will consider her options after Gillian makes her custody case in court. In Cicero, Van Alden is going to stand up to Capone, and comes clean to O’Banion. Rothstein will look to trade an insurance benefit for a cash infusion.”  The episode was written by David Matthews & Jennifer Ames & Steve Turner, and directed by Ed Bianchi.

On next week’s show Chalky goes to Nucky and inform him that it was Doctor Narcisse behind the heroin and the death of the Deacon.  Nucky question the fact that Chalky is asking him to impose a death sentence.  Chalky being Chalky replies, “Who is Asking?”  It looks like Van Alden is going to be working for Al Capone from now on.  He asks all for $1,000 to blow O’Banion’s head off.  Doctor Narcisse kind of threaten’s Nucky, big mistake.  He does not realize how tight Nucky and Chalky are.