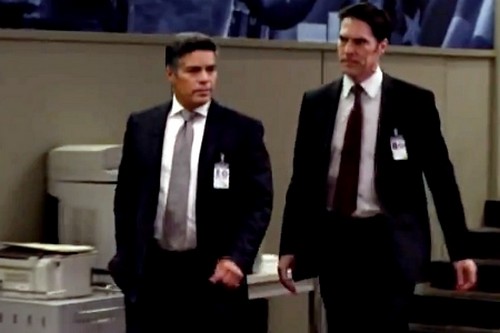 Tonight on CBS CRIMINAL MINDS continues with another new episode called, “The Caller” On tonight’s season 9 episode 10 the BAU reinvestigates a similar cold case to search for the UnSub.  Did you watch last week’s episode?  If you want to catch up before tonight’s new episode, we have a full and detailed recap, right here.

On last week’s show when skeletons were found in the backyard of a Virginia home, the BAU centered its investigation on the family living there, unearthing family secrets rooted in the past racial divisions in the South.  Esai Morales returned as the BAU’s Section Chief Mateo Cruz. Guest stars included L. Scott Caldwell (“Lost”), Emmy Award winner Glynn Turman (“In Treatment,” “House of Lies”) and Seth Gilliam (“The Wire”) as Tina, Charles and Lyle Johnson, respectively, the family who owned the house the BAU is investigating.

On tonight’ show when a young boy goes missing from his home in St. Louis, the BAU reinvestigates a similar cold case to search for the UnSub. Guest stars include Doug Savant and Marika Dominczyk as Malcolm and Lida Taffert, parents of the missing child.

A happy couple gets a disturbing phone call in the middle of the night. It was a child’s voice that said they were going to get you but instead of fearing whoever who called; the wife thought it was a joke. She didn’t realize it anything more until her son goes missing the next morning. Her husband found his blood on their front door.

The night before wasn’t the first time this same kidnapper called. He’s taunted this couple with several calls. That pattern of riling up the parents was last seen several years ago. Both cases tried to report this menace but no notice was taken by the police. It seemed the cops always waited too long. After their son went missing, the same child’s voice called and said “Did you see what I did?”.

The blood on their door wasn’t their son’s. It belonged to a pig. Why taunt the parents this way? The dad is a stock broker and the mother works in an antique shop.

The child was taken from his home. He is the same age as the other victim taken years ago. It could be the same guy or at least a very good copy cat. The kidnapper also knew Andy. He managed to coax the kid into leaving with him. Andy never called out, not once; despite the fact his parents were right next door. He simply grabbed his sneakers before he left.

In the older case, the police suspected the father. They call him back in on Andy’s case. They wanted to know where he was during the second kidnapping but it wasn’t him. A couple of years after the first victim, Frankie, disappeared his dad had a nervous breakdown. The kidnapper reached out to the father at the psyche ward. The child’s voice wanted to say “I got you didn’t I”.

Signs were pointing to Andy’s dad just like last time. Yet evidence later showed he couldn’t possibly be the kidnapper. No, the child’s voice was a recording. The very same recording used for Frankie. They got the last call, the one Frankie’s father received, and right afterwards the BAU found Andy’s body. The child was killed long before he was reported missing.

The killer is sadistic. He likes to drive home the parents’ grief as well as have the ability to pretend to be trustworthy. He got these kids to believe in him somehow. Then when he has the kids he lets everything fall back into being a game. Hotch has a theory on the pig’s blood. He takes the meaning back to the biblical. When blood would be smeared on the door to protect their first-borns from God’s wrath. This killer may feel like he’s protecting these kids from a worse faith.

The recording had some recognizable voices in the background. Tracing it they found a Portuguese woman that used to be in the trade. She told them about a time when she had to do a weird S& M role play. She was hired by a husband and wife. The husband liked to torture them. He hurt the women and his eastern European wife was the only one that truly feared him.

Andy’s parents were staying at a hotel. The press wasn’t getting vicious and camping out in front of their house. The mom left to get toothpaste when she suddenly disappears. The kidnapper changed his profile and decided to kidnap her. The BAU were confused over why. Why change his MO out of the blue?

The only connection between both boys that were killed are their mothers. They both had an Eastern European mothers. The same like the wife that was tortured by her husband. That women from before had a son. She tried to kill herself and her son in order to escape her husband but the boy survived. That kid grew up to have delusions. He would see these women with their sons and he would try to protect them in his mind from their fathers. Frankie’s mother killed herself so he didn’t need to intervene with her. Andy’s mother on the other hand was still with her husband. That’s why she was taken. He was recuing her.

This man was made to watch and record his father beating and raping his mother. That’s how his hatred grew. Once the BAU identified him, he was masquerading as a teacher; they tracked him back to his house.

They found the woman in a secret compartment in his house. Following the rest of the secret corridor, Reid was able to kill their suspect. Thereby putting an end to this long road of terror. At the time, Reid had to take the necessary force when he realized the man was going to kill Blake. He couldn’t let this person hurt anyone else.

In the end, Andy’s parents chose to go back home over another hotel. They feel closer to their son at that house but in the meantime they won’t be answering their phone anytime soon.