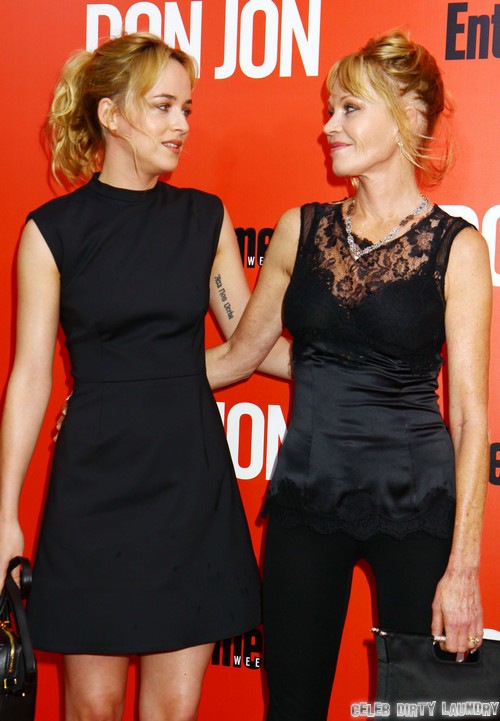 Being cast in the film adaptation of the popular Fifty Shades of Grey Movie series may be enough to launch a young actresses’ career to an A-List level and Dakota Johnson was on top of the world when she learned that she had snagged the role of Anastasia Steele. Now, just a few weeks later she is extremely fragile thanks to the extreme backlash from diehard fans of the trilogy.

According to the Sept. 30th print edition of National Enquirer Melanie Griffith and Don Johnson, Dakota’s parents are seriously worried that all of the upset will cause their daughter to take a serious tumble off the wagon. Dakota was once a hard partying teen and her drug addictions were bad enough to land her in rehab back in 2007. Those closest to her worry that the stress of the situation and the fact that everyone seems to be against her even before she has filmed a scene will result in her falling back into old escape habits.

Dakota had to know that this was one of those roles that was going to garner a huge reaction one way or another. Also whatever fans are saying now I’m sure is nothing compared to the reaction once the first film actually drops. It’s going to be really hard to bring the characters in the book to life on the big screen in a way that rings true, in part because of ratings. If it’s watered down in order not to get an R rating then fans of the book will be furious anyway. If Dakota can’t handle the heat then perhaps she really isn’t the best choice for the role. Do you think that she’s a good fit? Tell us your thoughts in the comments below!