Denzel Washington Cheating On His Wife Of 30 Years – Report 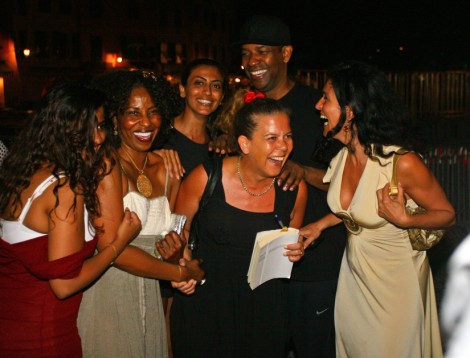 Why can’t Kate Middleton just have her baby? Why can’t Kim Kardashian just do the inevitable and sell her baby’s photos? Why do I have to wake up to stories like this? You’d think as a gossip writer I’d love this crap. I’m supposed to live for the smut. But, I really, really don’t want this to be true. Denzel Washington cheating? He’s too good for that. He’s the gorgeous star who doesn’t step out on his wife of 30 years. He’s the exception – not the rule. I won’t believe it. I don’t care if there are pictures. I don’t care if there have been rumors before. Denzel wouldn’t embarrass Pauletta Washington like this… would he?

Radar Online reports four photos are being shopped around. They consist of a Denzel with his arms around a younger woman who he kisses on the lips. Apparently this isn’t the first time Denzel’s been the subject of infidelity rumors. He supposedly hooked up with his Out of Time co-star, Sanaa Latham.

I still won’t believe it but let’s just play devil’s advocate and say that Denzel and Pauletta have an arrangement. Maybe she doesn’t condone the cheating but turns a blind eye. Or maybe she kicks him out until he comes crawling back again. There has to be plenty of great and not-so-great stories in a 30-year marriage. Basically, they’ve weathered storms like this before. But will the pics matter? It’s one thing to cheat under the radar, quite another to get called out by the tabloids with actual proof. The Washingtons do not court celebrity. They’ve managed to raise kids in this industry and I couldn’t pick them out of a line-up. Will Pauletta change her tune if her husband’s infidelities turn into late night fodder? It’s hard to turn the other cheek then….