Are Kristen Stewart and Robert Pattinson Exactly like Princess Diana and Prince Charles? 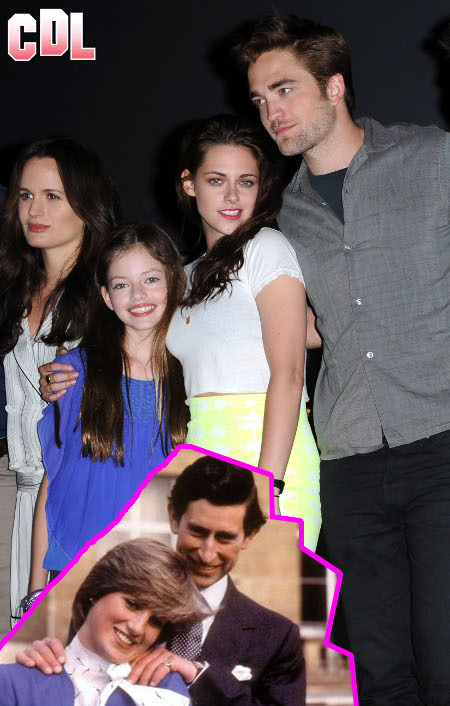 During his interview with New York Times writer David Carr, Robert Pattinson was asked about his strange new movie Cosmopolis and Carr made an interesting observation in front of the live studio audience. Carr compared Pattinson and Kristen Stewart to a tale as old as time — the Princess Diana and Prince Charles marriage. This comparison drew boos and horror from the crowd.

A long time ago, before time was invented, a small explosion happened and created what we know today. This is known as the Big Bang Theory. Several eons later, Kristen Stewart met Robert Pattinson on the set of Twilight and they fell madly in love. They were the couple of the (latest) century and grabbed media headlines quicker than a nun grabs tequila after an AA meeting. Their lives were blissfully intertwined with the hit Twilight trilogy and Taylor Lautner’s abs. They were inseparable, until one morning, not too long ago, when the news broke that Stewart had been cheating on Pattinson with Rupert Sanders, the director of Snow White and the Huntsman.

Akin to an alien invasion, the media jumped on the story. Poor Pattinson has a film to promote, but he has unfortunately been questioned more about the scandal than about Cosmopolis. It is, therefore, no surprise that Carr likened their relationship to Di and Charles, because as we all can fondly remember, Diana and Charles had more marital problems than Zac Efron has acting problems.

Pattinson said to Carr, “I think America really wants to have a royal family.”

To which Carr replied, “So, if you and Kristen have trouble it’s like Charles and Di having trouble?” Pattinson became visibly embarrassed and replied, “No, I really wouldn’t go that far.” Oops, Carr might have pooped his pants at this exact moment…

Let us do a quick mathematical equation, shall we? Stewart does not equal Princess Diana and Pattinson does not equal Prince Charles, therefore, Mr. Carr, your comparison is as null and void as The Voice. This is stupid. We’re crying over Diana again, damn! For more info on the Kristen Stewart Rupert Sanders affair click here.