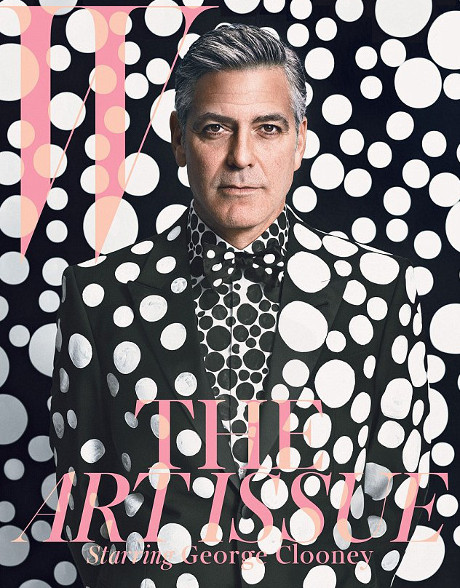 George Clooney, appearing on the cover of W magazine’s December/January issue, admits that there was a time in his life when he was “madly in love.” However, it seems that it has been a while since that happened — seeing as he was only eleven years old with his sweetheart being Audrey Hepburn. He claims he fell in love again when he watched Grace Kelly in To Catch a Thief, even saying she was “the most beautiful woman (he’d) ever seen.” It’s not shocking that the man who many claim is the sexiest man on earth falls for this type of classic-Hollywood elegance. But, don’t worry, ladies, he’s still on the market — at least for now.

According to George, filming movies can get pretty lonely for a 51-year-old, extremely eligible bachelor. He likes to be near friends and family, and says he only makes it through life by being near them. “I get desperately, depressingly homesick if I can’t find a way to be near the people that bring joy wherever they go.” He mentions his parents, his sister, and his friends, but wouldn’t it ease his homesickness if he had a lady by his side while he lived on movie sets for months at a time? It seems that way to me, and history seems to suggest he feels that way as well. From models, to actresses, to ex-wife Talia Balsam, to  rumors of relationships with Charlize Theron and Pink, George seems to like a woman on his arm.

Yet, somehow, in regards to a true love, he claims, “I haven’t met her yet.” Does that mean he’s actually looking? The George we all know flits in and out of countless relationship to pass the time, so it comes as a bit of a shock to me to read that he may actually be looking for something to last longer.

In his interview for W, he claims that passion is important to him — but so is passion that encompasses romance and hardcore sex! So, it seems that our dear Mr. Clooney is looking for the full package — a love that will last. But how long will it take him to locate this epic romance? What do you think, CDLers? Do you think George is out looking for true love or just enjoying a lifetime of casual relationships without commitment? I suppose only (more) time will tell.