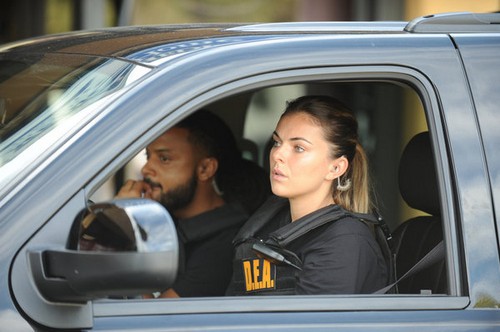 Tonight’s GRACELAND continues on the USA Network with a new episode, season 1, episode 11, called, “Happy Endings.” On this week’s show Briggs is forced to make a major decision about his future.  Did you watch last week’s season premiere? We did and we recapped it here for you.

On last week’s episode tempers flared and relationships were pushed to the brink when Charlie (Vanessa Ferlito) discovered a secret about Briggs (Daniel Sunjata) and began working with a Federale to find the truth. Mike discovered that Juan was missing and that the FBI had a suspect: Paul Briggs.  Guest Stars: Vincent Laresca, Ciera Payton, Dameon Clarke.

On tonight’s show looking for the truth about Juan’s disappearance, Briggs and Mike play a dangerous game of cat and mouse- forcing Briggs to make a major decision about his future.

The show airs tonight on USA Network at 10PM EST and we will be covering it with all the details.  So make sure to bookmark this spot, and come back for our live coverage of Graceland Season 1 episode 11 right here.  Enjoy the show folks!  While you wait for the recap, check out the sneak peek of tonight’s episode below!

Briggs knows he’s in trouble. He killed Juan and he has to get to Juan’s car. But there’s one person standing in his way; Mike. He tried sneaking out of the house only to run into Mike “sleeping” on the couch. He knows he can’t get past him and Mike will do pretty much anything to make sure Briggs never does get past. Briggs wants to cover up his crime and Mike want reassure himself that briggs is innocent. Their two agenda are going to lead to nothing but trouble.

Time to move onto Plan B. Briggs has no choice but to call in his favor with DJ. He was there for DJ and now it’s time to return the favor. Although Briggs doesn’t know that Mike has an ally as well. He has Paige.
The next day, DJ mentions how he has a big case he needs to finish up and Briggs, who’s ever so kind, volunteers. Mike even tries to play it cool by pulling Briggs aside to tell him maybe he should concentrate on his own investigation yet Briggs is keeping to his story. He shouldn’t interfere with the case or might people might suspect him.

It was supposed to be no worries. Seeing as Mike and Paige put a tracker on Briggs’s car. Yet they underestimated him. At the last minute he had DJ be the chauffer. Thereby escaping their trap. Still despite eluding them Briggs might very well had needed their assistance. After helping DJ stacks some exotic birds, as if they really needed two people, he got DJ to help him look for the dearly departed Juan’s car only to find someone has already stolen it.

While Paige and Mike on the other hand spotted Juan’s car off security footage at a gas station. Using federal resources even allows them to identify the driver as a gangbanging Momma’s boy. They need to find the guy quick and what’s the better than going to his church loving Momma with a fake pregnancy.

Meanwhile Charlie has had enough of Johnny not helping her with Odin. She calls him out on it too. Just because she thought it was Briggs doesn’t mean Jonny should try and ignore her. She may be onto something. If not Briggs another federal agent could be Odin. If Johnny won’t help then she’s only got to rely on her new friend Cortez. He at least listens.

He listens maybe a little too much. Charlie doesn’t notice that. Not when they’re talking about the case or when they go out for drinks. She also doesn’t notice that she had a quite a few drinks and that accepting Cortez’s offer to go back to apartment might not be the smartest idea.

She never did make it to the apartment. Dear sweet Johnny called her with a tip on Odin. He had begun to feel bad about abandoning her so this is him helping. In more ways than he knew.

On the search of Juan’s car, DJ needs to know why Briggs is so anxious. He knows something is up and he wants answers. Surprisingly, Briggs admits to killing a FBI agent. He tells him the whole story about the investigation on him and Juan dressing up as Jangles. He leaves out that he’s actually Odin. Still DJ wants to help. He hears murder and he still wants to help.

They arrive a little bit before Mike and Paige. Paige had gotten the whereabouts by using a prosthetic pregnant belly. Mike walks in as Briggs was making a deal with the gang for the car. Mike pretends to be part of Brigg’s cover story and now they’ll both go for the car together.

It was too much of coincidence that Briggs was there. Mike doesn’t trust him and surely won’t be leaving him alone with that car. That’s why Briggs asks DJ to give him time with the car. It’ll probably be 5-10 minutes max but Briggs needs it every minute of it.

Jonny is simply Mr. Helpful all of a sudden. Charlie got her help from him but she needs a partner to investigate with and it won’t be Johnny. Johnny thinks she’s making up this “partner” and follows her to her meeting with Cortez. He announces himself to them and when he learns Cortez is Mexican Federale; he becomes livid. Whatever these two are planning he’s now a part of it.

Nevertheless Charlie never got anywhere with her contact. Cortez was actually detrimental because the guy was only willing to negotiate if Charlie did him “a favor”. He got his beat up instead.

Mike pulls a fast one on Briggs and gets to the car first. He and Paige go into the car and find the tape recorder missing. Briggs didn’t follow behind them. He had returned to the house, got what he needed, and then left. Briggs is on the run.