Ice-T & Coco To Divorce: He Wants To Repo The Boobs & Butt 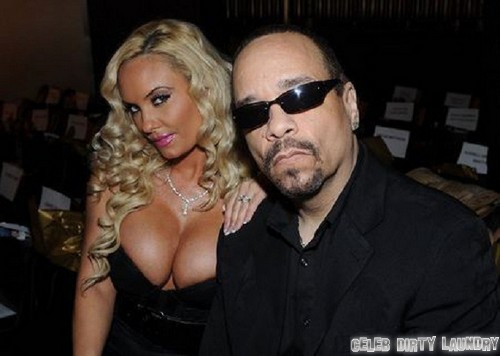 After this AP9 fella kept bragging that he tapped Coco’s fake hiney, it appears that her husband, rapper Ice-T has filed for divorce. While we have yet to receive any official confirmation of such, it would make perfect sense.

In January, Coco was put on front street for smooching up and getting close to AP9. It was said that she was closer to him than any friend would get, prompting Ice-T to have a conniption fit on Twitter. She apologized, but not before the rumors got out that she was banging this guy. Now, it appears that Ice is fed up. From CBP:

“I can’t unbreak my heart, but I can take that ass back tho” said an obviously hurt Ice T in front of a courthouse Friday morning after filing for divorce from his wife of 11 years Mrs. Coco T after pictures of her kissing a fan surfaced online. “She can have the money, the house, but them t*tties is mine” Ice T said after explaining that hitting her where it hurts will do more damage than leaving her broke ever would. “I’ma let her start March off with nobody and no body.” Ice T wants her assets delivered to the doorstep of his New Jersey estate no later than March 1st or any monetary support Coco would receive from the divorce will be withdrawn. Friends close to Coco say she is devastated as without her cosmetic surgery she’s just another white girl without an ass.

We’re waiting on the official confirmation on this one. Let’s see the divorce documents or the case number before we’re buying into this one! What do you think? Hit the comments and let us know your thoughts!