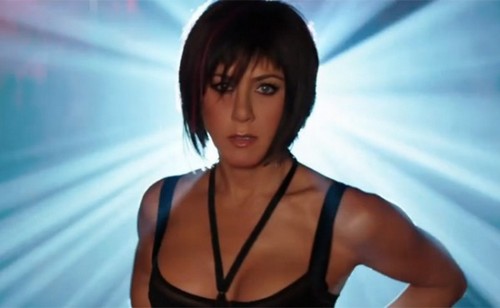 Jennifer Aniston played the raunchy card to great effect and big box office numbers in We’re The Millers, but fans will be surprised to know that the promotional material for the film was actually much less revealing than some of the stuff kept hidden.

A series of previously unseen promotional stills from the film have gone viral, and they’re actually very racy – even more so than some of her scenes in the film. Below we have a closer at the photos, which have Jennifer showing off her body in a bra and underwear. However, that’s not even the raciest part – the bra is so thin that you can practically see everything through the lace.

Of course, Jennifer’s not new to stripping or wearing revealing clothes for her career. She’s previously taken it all off for films such as The Good Girl and The Break-Up, and surprisingly enough, both of those films were either critically acclaimed or commercially successful. Perhaps we sense a trend?

Obviously, Jennifer isn’t going to strip off for no reason, especially if the character doesn’t require it. Her character in We’re The Millers was an actual stripper, so it would have been silly had she insisted on covering up. And both of her nude scenes in The Good Girl and The Break-Up were justified and not necessarily just gratuitous. Besides, showing skin is definitely a way to get the audience talking about a film before it’s release – We’re The Millers’ first trailer was viewed countless times on Youtube, and it generated a lot of interest based on the fact that Jennifer was playing such a raunchy role in her return to big-name comedy. Of course, it’s unfortunate that a celebrity stripping is cause for such interest, but I don’t think we’re evolved enough as a society where that won’t cause ripples in the media.

What do you guys think about the images? It’s likely that they were released to drum up buzz for the DVD release of the film, but will it work? Let us know in the comments.