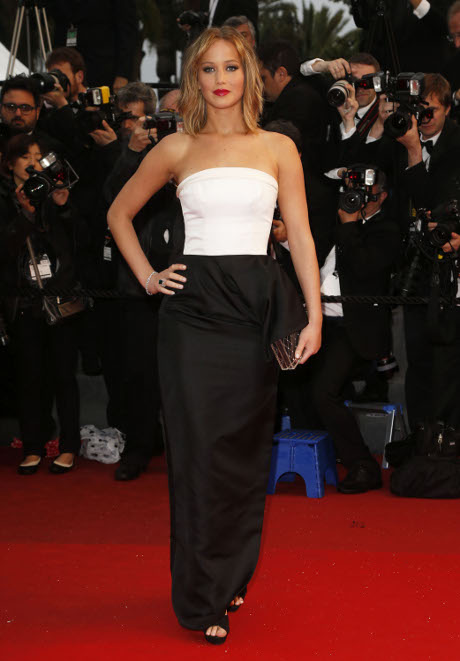 According to sources, Jennifer Lawrence has pushed the romantic memories of her and Nicholas Hoult from her head and has moved onto another man, one with a few more  muscles, but a bit less talent. Man, their writers must be getting lower salaries because the quality of their fan fiction has severely dropped in the last few months.  If you’re going to make up a story, Star Magazine, at least make up a story that people will believe. ‘Jennifer Lawrence and Liam Hemsworth getting romantic’, really? J. Law’s got some standards, and Liam definitely would NOT make the cut.

Star Mag tries to justify their headline by saying, “It’s on for Hunger Games costars Jennifer Lawrence and Liam Hemsworth! The long rumored couple were finally caught canoodling in public while in Cannes, France — in the VIP section of the Hunger Games: Catching Fire party at Bâoli on May 18.”

They claim that a ‘source’ saw them together, saying, “Liam and Jennifer were flirting all night long. They were giggling and couldn’t stop touching each other! Jennifer kept putting her hand on his knee while Liam leaned in, whispering in her ear. The electricity between them was off the charts!”

You know what this supposed ‘electricity’ is? It’s chemistry. It was the reason Liam and Jennifer were cast together in The Hunger Games, and it’s the reason that they’re such good friends. That being said, if chemistry was the sole reason for celebrities hooking up, practically everyone in Hollywood would have slept with each other by now.

Sure, you can claim that’s already happened. Fine. You want to know why else Jennifer and Liam would never happen? Because Jennifer used to date Nicholas Hoult. Who in their right minds would go from Nicholas Hoult to Liam Hemsworth? I’m not denying Liam’s good looking, but Jennifer has always seemed to be attracted to talent and class more than anything else, and I’m sorry, but Liam is like a hunk of rock who simply cannot act.

But hey, a message to Star writers: wait until Liam gets better at his job, and then if Jennifer’s still free in a few years and has somehow stayed single, you can try hooking them up again.