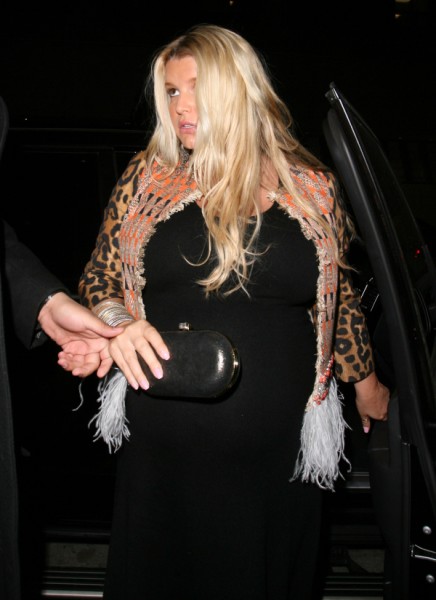 My sister and I were talking a couple days ago about all the pregnant celebs and which ones we were most excited to see progress through the nine months (which is just a nice way of saying balloon up). Kate Middleton seemed the obvious choice to me because I want to see how she handles it and what she wears. But my sister was like “No man, Jessica Simpson all the way.” And I had to concede. It’s really fun to see how huge one person can get.

And it’s really not her fault (that much). Pop tarts and fried Twinkies aside, Jessica’s body is just more voluptuous than most and two babies in two years isn’t helping anything. Her boobs were already huge; her stomach was already stretched out. Despite what those Weight Watchers commercials are spinning, she didn’t give herself enough time to bounce back before Eric Johnson knocked her up again. So it’s really no big wonder that she looks way more pregnant than she probably is right now. I can’t hate on her for that especially since she’s been interviewed lately saying her eating is going to be more responsible this time around.

But Star magazine isn’t being as kind. The mag claims Jessica Simpson’s pregnancy weight gain is already out of hand and she’s growing at an “alarming rate”. She apparently has already put on 35 pounds and that’s more than most women are encouraged to gain through the whole nine months. I think she’s only four – maybe five – months along at this point so if those numbers are right on then she’s about on par with what she did the first time around. It’s been said she gained about 80 pounds with her first pregnancy but she only admits to around 60. Tomatoes/tomatos at that point.

Of course Star’s weight analysis was just based on pictures. I looked at the same pictures. Does she look noticeably bigger? Of course. Is it 35 pounds? I have no idea. At this point we know Jessica Simpson can take the weight off. She sorta did it after Maxwell Drew Johnson was born and we all know she’ll do it again. If she wants to pack on a good 50 then fine. She knows what it will take to get it off. Maybe she’ll do a Kate Hudson. Kate got GINORMOUS during her first pregnancy gaining something like 80 pounds but calmed herself during the second one. It’s a learning process. I’m not saying Jessica’s the sharpest tool in the shed but she has to have a better clue of how to handle herself now, right?

Do you think Jessica Simpson’s gaining too quickly again? Do you believe her when she says she’s trying to treat herself better this time around?