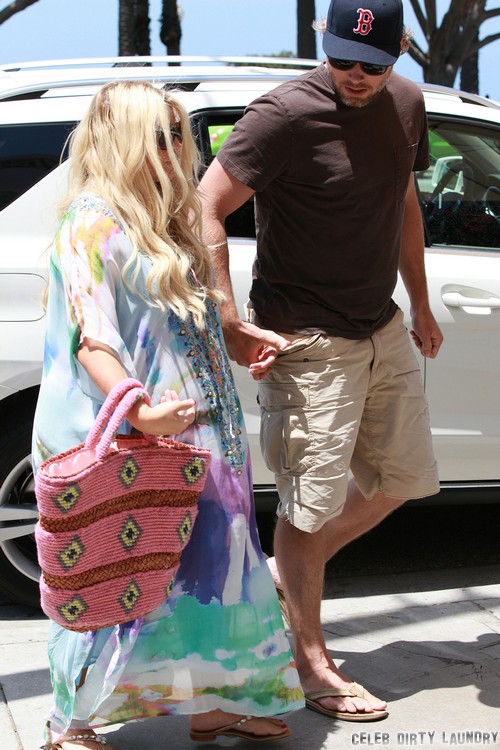 It’s only been a day since Jessica Simpson gave birth to her baby boy, Ace Knute Johnson, but talk is already going around that she’s planning to have ANOTHER baby in the near future in hopes that she can finally get out of the $5million WeightWatchers deal she signed last year.

Jessica inked a deal with the company during her first pregnancy; the purpose of this was pretty much to see whether or not she could bounce back into shape following the birth of her daughter Maxwell. She was given five months to do this and was paid in advance – so the company must have really thought that Jess could pull it off.

However, as we followed Jessica’s journey, she was really struggling to lose any weight, despite the fact that she had been making numerous visits to the gym every single week. Fast forward a few weeks, and Jess still hadn’t had any kind of dramatic change to her body – and she was putting out fake magazine covers using her pre-pregnant body as we discovered and broke the story here at Celeb Dirty Laundry. Jessica was still looking plump and chubby, and by then, she knew she wasn’t going to be a smoking hot mama in the required time WeightWatchers had given her.

Simpson had no intentions of giving the money back though, so her only other plan was to get herself knocked up again and hope that the company would just leave her alone and find someone else to promote their crappy products. But that isn’t the case, WeightWatchers still very much wants to get their money’s worth and are already on Jessica’s back by telling her she has another 5 months to shed the weight for the second time around, and if she can’t do it, they want their money back.

The 32-year old is hoping that falling pregnant for a third time might finally get WeightWatchers to just drop her from their endorsement deal.  Do you think Jessica will make her Irish twins into Irish triplets?

Jessica Simpson and fiance Eric Johnson out for lunch in Los Angeles, California on June 22, 2013