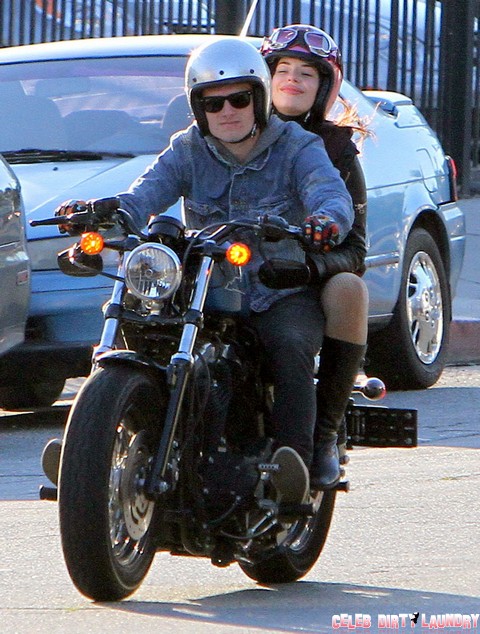 The stars of The Hunger Games aren’t ready to follow Twilight duo Robert Pattinson and Kristen Stewart’s lead and start a smoldering off-screen romance to boost ratings. Despite a slow-brewing on-screen romance, Josh Hutcherson isn’t looking to make Jennifer Lawrence his arm candy—despite being one of Hollywood’s most promising young actresses! Instead, Josh is amusing himself between films with ex-girlfriend Lanchen Mihalic. The couple was just spotted riding on his motorcycle through Studio City in Los Angeles; Lanchen was all smiles and giggles while Josh worked hard to keep on his stoic, bad ass face!

The couple broke up last year, and Josh cited the time commitment of filming as the reason. “It’s tough when you’re in a relationship and you’re on set,” he explained. “I’m not in one right now because of that.” Photos show Lanchen looking quite comfortable and dressed for the part: she pair corduroy leggings with tall boots and a leather jacket, topped with a bubble gum pink helmet. I guess we know this was a planned date, not a romantic surprise pick up! She tucked could hands into Josh’s denim jacket and held on tight while he sped through LA.

“I’m very proud of being a sensitive guy. It’s one of my favorite things about myself,” he joked in an MTV interview. I guess he isn’t aware that Jennifer was totally caught checking him out while they filmed Catching Fire in Hawaii! Maybe she’s channeling all of her crush vibes and sexual frustration into the role of Katniss, who we’ll see incite revolution again come November. Do you think Josh is snubbing Jennifer by reconnecting with his ex, or is their relationship strictly platonic and professional? They have two more movies to get through filming together—remember, Mockingjay has been divided into two films, a la Harry Potter and Twilight. Will Jen be able to keep it together if her costar and soon-to-be boyfriend is harboring l’amour for another?