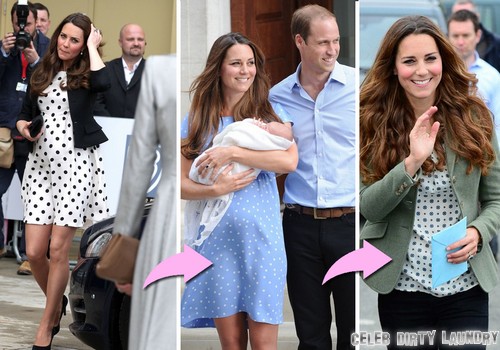 Kate Middleton, The Duchess of Cambridge, has made her very first official public appearance this morning since her baby was born – informal shopping trips don’t count! Kate was alongside her husband Prince William while he started a marathon on Anglesey that was 135 miles all around the whole island. Though their son Prince George was nowhere in sight; they left him at a farmhouse that they have rented and Kate’s mother Carole is babysitting for them.

The 135 mile marathon was quite tricky, there was several different types of terrains that the runners had to go through like; cliff top paths, fields, forests, roads, beaches and sand dunes. Doesn’t that sound like fun?

Kate wasn’t planning to attend the event at first but she apparently really wanted to take the chance to thank all the people of Anglesey for their hospitality that both her and William received while being there. As you can see Kate looks pretty good after giving birth to her son; she has a flat stomach and it’s only been a little more than a month! But she’s done nothing to lose the weight at all other than some casual yoga right after.