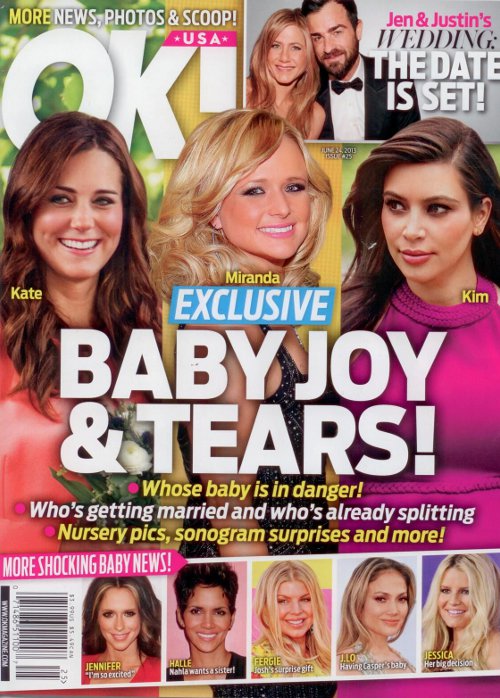 There seems to be an endless about of baby drama being birthed into the celebrity sphere and OK Magazine‘s most recent cover definitely captures that energy. The title of the recent edition is “Baby Joy and Tears,” and, as we’ve seen day in and day out, a celebrity mother definitely has instances of both joy as well as some tears.

Just recently, Kim Kardashian figured out that Kanye West might have cheated on her with a 24-year-old bartender. Now, if that’s not a reason for some tears in the mix of all her baby drama then I don’t know what is.

Other people featured in the magazine are, of course, Kate Middleton, who’s expecting her baby on the same day as Kim Kardashian, and Halle Berry, who’s pregnant again. She tells the magazine that Nahla is looking forward to having a sibling.

The subheading of the magazine reads . . . . “Whose baby is in danger! Who’s getting married and who’s already splitting; nursery surprises, sonograms, and more!”

The magazine also gives a run down of other baby news in Hollywood that would definitely be worth checking out! The magazine also reveals the Jennifer Aniston & Justin Theroux wedding date. Supposedly, it’s now set firmly in stone, and we look forward to their exchanging of vows.

Let us know in the comments section below what you think about all this Hollywood baby drama. Do you think it’s too much? Do you care?