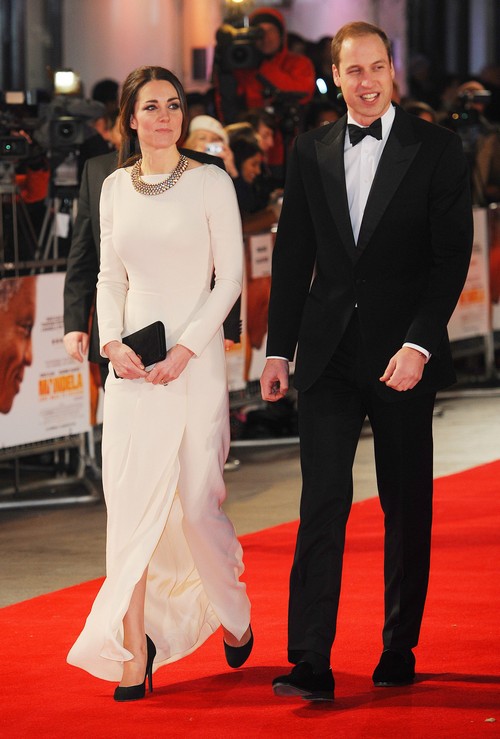 Coincidentally, Prince William and Kate Middleton were on hand at the premiere of Mandela: Long Walk To Freedom as news trickled in about Nelson Mandela‘s death. The premiere was held in England, at the Odeon Leicester Square in London. In addition to the royal couple, Mandela’s daughters were reportedly also in attendance, as well as several extended members of the Mandela family.

As news started to trickle in about Mandela’s death, the producers and filmmakers took the stage in tears before the screening was about to begin. According to reports, they were planning on stopping the screening when they got news of Mandela’s death, but his daughters asked them to continue. They introduced the movie, and as the credits started to role two hours later, a Nelson Mandela photo montage played in the end. Idris Elba, along with several of the other cast members, asked for a moment of silence to honor Mandela at the end of the screening.

Elba also spoke to reporters after the screening, discussing the fact that Prince William and Kate Middleton were in attendance. He said, “Tonight is extra special because this is my country, and when the royals come out to watch a film, it’s a big deal. I feel very proud that it’s my film, really proud.” Naomie Harris, Elba’s co-star [she plays Winnie Mandela], echoed Elba’s sentiments, claiming that Will and Kate were extremely nice and polite.

Kate and William reportedly only found out about Mandela’s death during the movie, and they left right after the credits rolled.

Celebrities attend the Royal film performance of ‘Mandela: Long Walk To Freedom’ at Odeon Leicester Square on December 5, 2013 in London