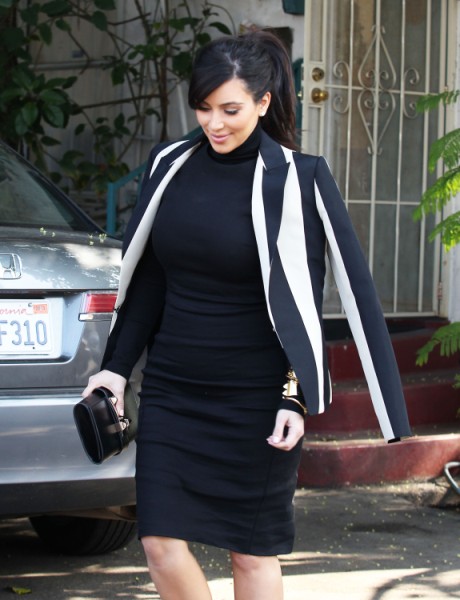 Wouldn’t you? I’m just saying… we’ve already found that Kris Humphries won’t be bought so what do you do when $10 million can’t solve the problem? You use that baby, that’s what.

Kim Kardashian’s baby bump has been all over Los Angeles the past few days pitching  its plea for freedom. In all fairness to Kim, she does stay busy and she does like tight clothes. There’s really nowhere for that baby bump to go but out as it squeezes into yet another ill-conceived outfit.

Yesterday we saw Kim sashay around town in a LBD on her way to some social media thing as news broke that she’s petitioned the judge in her divorce case to set a trial date be set as soon as possible or for a judge to grant her a divorce not reliant upon the financial disagreements still pending between her and Humphries. In a rather revealing letter she wrote: “I am requesting the status of my marriage be determined now for not only my health and welfare but also for the health and well-being of my unborn child. I firmly believe that an immediate dissolution of our marriage will help create a new, full life for me. One chapter will be officially over, and a new one can begin. The same should hold true for [Humphries].”

Is it coincidental that as these words are read all over the internet her belly has suddenly swollen in size? I have to admit this idea came to me by accident. I was reading headlines one after the other this morning of the Kim Kardashian court drama and came upon the story “And suddenly Kim Kardashian looks very pregnant as she takes her baby for a stroll”. And it hit me. Is Kate padding that bump to gain even more sympathy from her judge? You can’t throw a grain of rice without hitting a pic of Kim K lately. The judge would have to be blind not to see hard-tested Kim navigating through her pregnancy (and gritty Beverly Hills) while shackled to a money and vengeance-hungry giant of a man. Pictures speak a thousand words. You think Kim and Kris Jenner don’t know that?

I could just be making this whole thing up in my head though too. It’s not the first time. I always think Kim has some secret hidden agenda. But yesterday was the first time I saw Kimmy dressed up without a shawl or coat or something to hide that pooch outside of her workout gear. Do you think the timing is suspicious? I’m not hatin’. It’s smart. And if we know anything about Kim, we know she’s a fan of using what the Lord gave her to get ahead!

Could the baby bump sway the judge in the Kim Kardashian/Kris Humphries divorce case or is Kim just wasting her time?