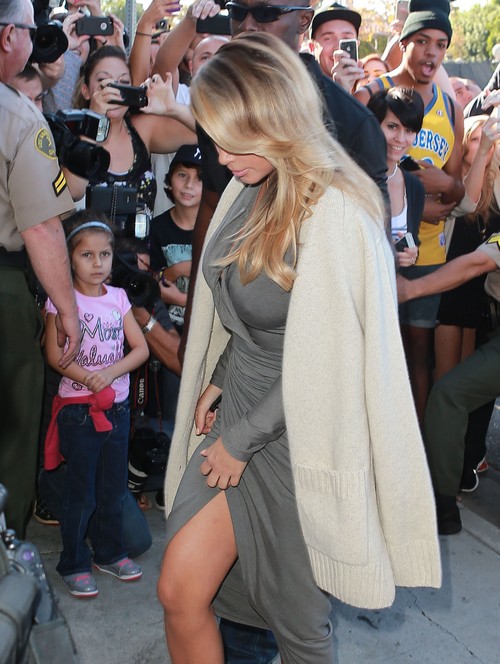 We are sad to announce that after two consecutive days of staged “call-the-paparrazi” photo ops with North West, first to support Kanye West at Jimmy mel Live, and then to the doctor, Kim Kardashian returned to her natural calling Friday, herself.  Kim took Khloe (looks like she got her lips done again) and half-sister Kyle Jenner to visit one of the family’s DASH stores – this one in West Hollywood.  Now that Kim has recovered from her post birth liposuction and plastic surgery it seem she plans to return to her enjoying her daily outing for which the paps are called in advance and Kim gets to dress up and show off.

Off course there is only so much covered stroller schlepping Kim is willing to do – and Genius Dictator Kanye West hasn’t yet consented to allow his child to be formally sacrificed for the Kardashian/Jenner brand.  So looks like poor Nori is back to bonding with the hired help while her parents – or should we call them egg and sperm donors – continue on with their very busy and very important lives.

In case you think that after a day spent busy applying makeup and getting ready for her photo op at DASH Kim returned to bond with Nori, think again.  After Nori was left to spend the day bonding with servants, the child received more of the same care Friday night. Without a motherly bone in her plastic-surgery-sculpted body, Kim abandoned her daughter again last night for a date with Kanye West. The Genius took Kim to the LA Opera – LOL!  Can you see the two parvenu famewhores attending the Opera?  Does Kanye think he can instill some class in his sex tape baby mama by dragging her to culture-rich events? Maybe he’ll make Kim enroll in college next?  One thing you can count on, poor Nori is paying a huge price in her emotional development for Kim’s return to the look-at-me circuit. Good luck kid.  What do you think about Kim?  Is she a monster mom or a fine example for all?