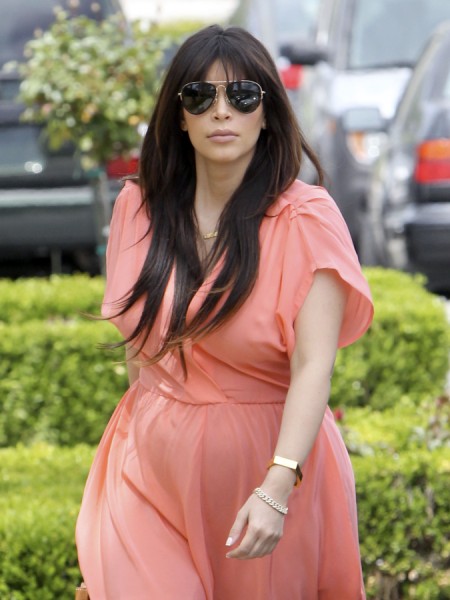 Why does this pregnancy have to be so complicated? After near miscarriages, busted cysts, stressful song lyrics and uncontrollable weight gain we have yet another story that clearly shows Kim Kardashian’s life as the diabolical and written-for-TV freak show that it is. According to reports this morning, Kimmy may be lying about her due date so she can buy herself some time to lose the weight before the world sees her for the first time post-baby. I know! It’s so crazy only Kris Jenner could have come up with this one.

Page Six let us in on the little secret that it has heard rumblings that Kim is in fact due in mid-June NOT mid-July like she was leading us to believe. Kanye West’s baby mama was overheard telling friends at fashion stylist Monica Rose’s baby shower. If that’s true she’d be over seven months pregnant right now. Page Six went on to hypothesize that Kim could be lying so she could hide out and have the baby, take the extra month to lose weight quickly and be back looking closer to her old self around the time she announces the faux birth. Crafty, right? Who thinks of these things?!!

Does this explain a lot? Does this explain why she’s bigger than most other 6-month-along women? Is this shady of Kim Kardashian? Due dates aren’t exactly set in stone and I can’t remember if she even told people as a fact she was due in July. I think when she announced her pregnancy we all just assumed she was three months along because that’s the general time women tell people. So she could be due in June and not be trying to fool us. But where’s the fun in that? I love a good Kim Kardashian Lying conspiracy story! And this isn’t totally unbelievable. I’m sure more of them do this then they let on. Have the baby three weeks early and get a routine tummy tuck/lip job in the meantime. Take a couple weeks to heal and voila good as new! Then she can sell millions of tabloid covers discussing how she lost the weight so quickly. Brilliant. I thought Jessica Simpson was the genius. Why didn’t she think of this? Oh, right, $4 million Weight Watchers contract.