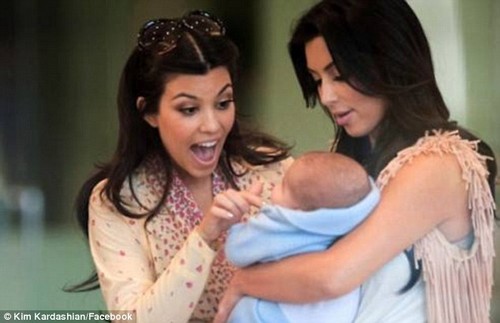 Jeez, even when Kim Kardashian goes away we still have to suffer through her desperate attempts for attention! The reality whore dropped off the face of the earth after giving birth to little North West on June 15th and I have to admit, I’m pretty happy about it. The media’s wanting to catch a glimpse of Kim’s new baby was thank god surpassed by the birth of Prince George Alexander Louis who by birthright deserves all sorts of attention.

However you and I both know that even if a Kardashian goes away there is still a gimmick and this time around it’s posting photos of other peoples’ babies on Facebook and Twitter. Just in time for the premiere of her doomed talk show Kris Jenner was snapped and pimped holding a newborn- that belonged to a make up artist. Now Kim posted a photo of herself holding Kourtney Kardashian’s baby Mason Disick, years ago.

It took fans no time at all to catch on to the fact that they were being scammed yet again and there was actually some backlash! I think even the Kardashians’ core fanbase could care less about Kim’s unveiling baby Nori. I’m sure she originally thought this would be an exciting build up and that at some point skinny Kim will emerge with her baby girl and it’ll be a moment worth a mint.

Instead I don’t think many people care any more. My suggestion for Kim would be to work a little on bonding with her daughter rather then coming up with new ways to try and remain relevant because it’s not working.

Are you sick of the Kardashians’ desperate attempts at grabbing attention? Tell us your thoughts in the comments below!