Kim Zolciak Caught Smoking While Pregnant With Baby No. 5! (PHOTOS) 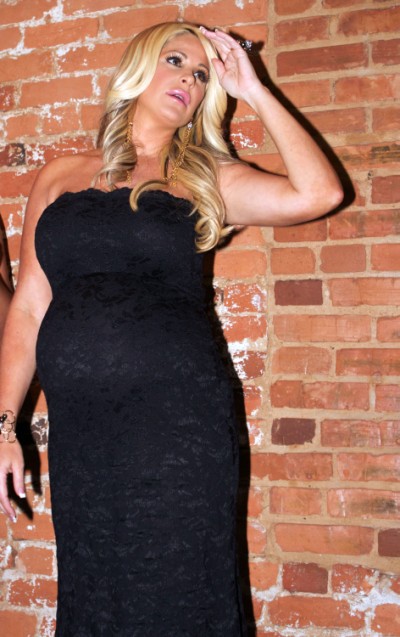 Just nine months after giving birth to her second son with pro football player Kroy Biermann, Kim Zolciak is pregnant proving yet again that God has a sense of humor and “trash box hookahs” are fertile as all hell.

Way to go Kroy. There’s absolutely no way you’re getting rid of this one on the cheap now.

For those of you keeping count this is Kim’s fifth kid with her third baby daddy but I’m not hating on that anymore. If Oscar-winner Kate Winslet can have three kids with three different fathers with no shame then so can a real housewife from Atlanta. This really comes as no surprise since the Tardy for the Party singer has dropped hints on her spin-off that she and Kroy wanted another daughter and since Kroy’s an idiot and Kim’s hell bent of spending all of his money they must have gone for it. Life & Style broke the story yesterday. But here’s the nasty problem. Pics of Kim Zolciak smoking while on vacation in Florida just surfaced yesterday as well. So is Kim Zolciak pregnant and smoking? You can see the pics HERE. Classy, yes? They were taken over Memorial Day weekend so we can assume Kim was pregnant at the time however we can’t assume she knew it. HOWEVER, that biotch has been knocked up so many times you’d think she would know the second it happens. And wouldn’t she cut down on the smokes if she was readying her body to incubate again? Or is that just want non “trash box hookahs” do?

Poor Kroy. Boy is dumb but boy is sweet. And I can’t imagine that he would let her smoke while pregnant. But he’s so innocent. All she has to do is lie to him and tell him the smoke only goes into her lungs and no where else and he would believe it. She was a nurse after all – a labor and delivery one at that.

Anyone surprised by the pics or the pregnancy? God, that woman is fertile.