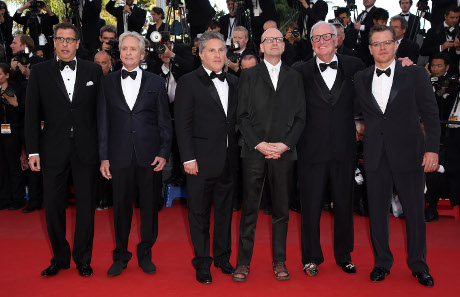 Liberace’s been in the news lately thanks to ‘Behind The Candelabra’, the HBO biopic that focuses on the life of Liberace [played by Michael Douglas] and his young lover Scott Thorson [played by Matt Damon]. While the movie focuses on the very sweet romance between the two in their early days, it’s a very different story in real life.

Scott Thorson has taken to the press to announce that Liberace knew he had AIDS when he infected three of his young lovers. Scott tells the National Enquirer, “Liberace was a sex addict: He never used a condom, nor practiced safe sex. [Liberace] lovers Cary James, Chris Adler, and all died because of him — and there could be several others. Liberace’s dead today because of his lifestyle, his sexual addiction, and he had this weakness for young men.. I know because I was one of them. I was very lucky that I didn’t contract the AIDS virus.”

Indeed, Scott dated Liberace at an incredibly young age, when he was still a teenager. They dated for six years before circumstances tore them apart, all of which are vividly documented in Behind The Candelabra.

This shouldn’t really come as a surprise to anyone who’s been interested in Liberace’s history. His sexual promiscuity was one of his trademarks, and it was also something that was highly public. While Liberace died of pneumonia, not an STD, it could have just been a long time coming. Of course, Scott’s claims could also be a result of bitterness – in that, we won’t really know and can’t prove, considering that Scott also added that all of his Liberace’s young lovers who contracted AIDS have already died.

Do you guys think Scott’s telling the truth? If he is, then Liberace certainly managed to get lucky and outlive some of the lovers he infected, didn’t he? Let us know what you think in the comments.