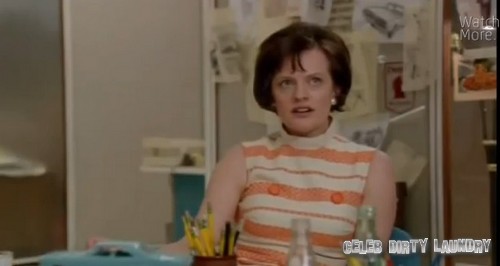 MAD MEN continued tonight with another fantastic episode, I cannot wait until next week.  Next week’s episode is called, “The Crash,” and we have managed to get our hands on some juicy spoilers and a sneak peek video of next week’s episode.

On tonight’s episode  Roger fires Bert who doesn’t leave quietly. Joan is sick and Bob takes her to the hospital, she finds out that she has a cist on her ovary. Don and Sylvia’s relationship heats up and Don is happy that he is in control of his affair with her. But, when Sylvia is left alone to think while Don heads out of town with Ted for the Mohawk account, she feels ashamed and ends their relationship. Pete has his own troubles, but this time they are not Trudy or his father-in-law, his mother is at his place and becomes a burden to him.  Did you watch tonight’s episode?  We did and we recapped it here for you!

Spoiler alert: If you’re one of those people who doesn’t like spoilers, stop reading now! We have some juicy spoilers for you about the season 6 episode 8 AMC’s “Mad Men.”

On next week’s show Peggy wants to know what is going on, Roger explains that everyone is going to have to get used to things. Don looks like he is doing some napping at the office to clear his head and Pete looks even more annoyed with what is going on in the office and thinks something is in poor taste. Ted tells someone that they didn’t make something clear, it would have to be Don since they are the ones that merged together. Don looks terrible, more problems on the horizon, hopefully they are not both personal and business. Stan has a spectacular idea that he shares with Ginsberg. Roger feels like things are worse than he thought and Don doesn’t believe they can go on like this while Megan is concerned that Don is not home where he should be.

Mad Men Season 6, Episode 8 “The Crash” airs on AMC on May 19th, 2013. Check out the preview video from episode 8 HERE let us know in the comments below what you think of Mad Men season 6, so far?