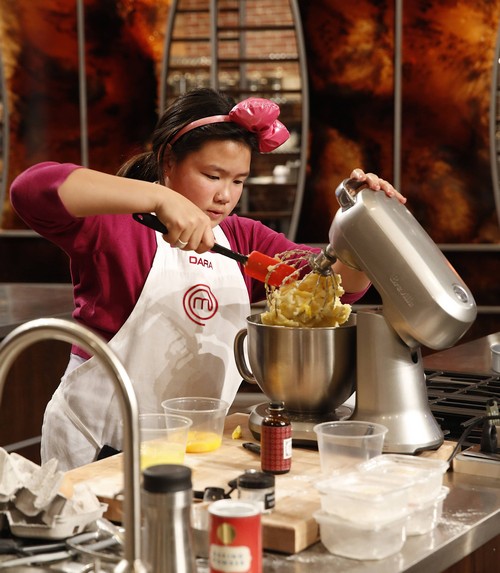 Tonight on FOX MASTERCHEF JUNIOR continues with a new episode called “Bad Food Bares.”  On tonight’s show the kids create dishes using “food kids hate.”  Did you watch last week’s episode?  We did and we recapped it right here for you!

On last week’s episode the junior contestants manually whip liquid cream and then tested the stiffness of their concoctions by holding the bowls of whipped cream over the judges’ heads.  Gordon had this to say about the experience, “That’s the first time ever I’ve had a liter of cream poured over my head.”  Later, the chefs cooked up beef Wellington.

On tonight’s show the junior chefs are tasked to create meals using ingredients that are typically unpalatable to kids, including liver, sardines and blue cheese.  The young chefs aren’t pleased to find items such as liver, kidneys, snails and sardines.  Later, they bake layered cakes in an elimination round.

Don’t forget to join us for our live recap tonight at 8:00pm when MasterChef Junior Season One episode 4 airs on Fox.  While you wait for the recap, let us know how your enjoying this season of MasterChef.

The top 8 kid chefs stream in to the MC kitchen to find a new mystery box! Sarah can’t even see over hers! Gordon teases her about it and Graham welcomes them all back and congratulates them for making the top 8. Joe tells them the winner will get a game changing advantage.

The kids open the box and are immediately grossed out. Gavin says the stench is awful. Liver, kidney, snails, sardines, Brussels sprouts and more. The sardines are still heads on and the kids are appalled. Joe starts their 60 minute countdown and the kids all rush to the pantry.

Jack decides to deep fry kidneys. Troy is making snail chowder. Dara is making blue cheese soufflé even though she hates the smell. The chefs agree it’s a tough box and isn’t stuff they would have eaten as a child. Alexander is making sticky pudding with dates and is including candied fennel. Sofia tells Graham the meats grossed him out – she’s doing escargot and nettle soup.

Sarah is making deep fried sardines with heads on and Brussels sprouts fennel salad. She tells him she’s very confident. The kids are down to 15 minutes and Jack says he surprisingly likes his kidney. The chefs are surprised that Dara is daring a soufflé and they say no one has ever done one on a mystery box. It looks like they aren’t done. Uh-oh. The kids scramble to plate their dishes and they lament that Dara may be out of it.

They judges look at them all to select the top three for tasting. Gordon tells Dara next time to only fill the container half full so the soufflé will cook faster and fluffier.

Gordon calls down Troy – making it his second time in the top three. He has a snail chowder with baked eggplant peels. It is beautiful. Gordon tastes it and says it’s rich and creamy and says the snails are perfectly cooked and that the dish is mind blowing. Graham asks why he cooked the eggplant skins and Troy says it’s more creative and interesting. Graham says he’s spot on. Joe tastes and says the soup is good and thanks him. Troy feels good because he’s never had bad feedback.

Graham calls down the next dish that he says looks restaurant worthy. They call down Alexander who brings down his sticky toffee pudding. Graham tastes it and then writes WOW on the dish in caramel. He says it’s incredible and delicious. He says he would only change it by adding more toffee sauce. Graham says it’s beautiful and says he personally doesn’t like the funnel but says it’s a technically amazing dish.

Gordon announces the best dish was Sarah’s and she’ll get the advantage for the next challenge. She heads to the pantry with the judges. They ask who she’d like to see leave and she quickly answers Alexander and Troy and they agree that would be smart to cut them. Tonight’s challenge is baking and Joe says the first item she can choose from is a cupcake. Graham says the layer cake is another choice- he says he would pick that to get someone sent home. Gordon says the final option is a pastry – fruit tart.

Joe tells her she doesn’t have to bake in the challenge and is safe from elimination. Sarah runs upstairs and sits upstairs with a giant vat of gummy bears while the other kids are told they have to bake layer cakes. Alexander says this will be the death of him because he sucks at them. Sofia says she hates cakes. They are told it must have at least three layers and they run off to the pantry.

Troy says he’s never made a cake and isn’t sure he can pull it off. Dara says she made her mom’s wedding cake when she was just 10 so she’s pretty confident. Graham says this is a big deal and could screw up the kids easily. Gavin is making chocolate because Gordon told him he loves chocolate.

Sarah drinks a milkshake and happily watches the mayhem. Joe says that he fears Alexander will overcomplicate things and miss the mark. Alexander mistook flour for powdered sugar and has to start over!

The kids are all putting their layers in the oven when Graham asks how Alexander is doing and he tells him about his sugar/flour debacle. Graham says Sarah chose the layer cake specifically to get him out and it seems to be working. Sofia is crying because he batter is a wreck. Gordon runs to help her. He tells her not to worry and to start again. He starts her over and actually helps her. Is that legit? He is basically saving her from elimination… He coaches her through the process and gives her a pep talk.

Joe wants to know why Jack’s mixer is smoking – he’s making meringue buttercream frosting and Joe asks why he’s trying to feed them all that butter and sugar and Jack warns it could give them diabetes.

Gordon comes up to see Sarah and asks her for a gummy bear. He asks her how her plan to target Alexander is going and she thinks it’s going well and that he took his cakes out too early. She says Gavin and Jack will be in the top two. She tosses a gummy bear down to Jack and tells Gordon she’s keeping her friends close and her enemies closer because Jack is a huge threat. Gordon asks for another gummy bear.

The kids are frosting their cakes and they discuss that Gavin used every kind of chocolate they had in the pantry. The kids are adding the final touches as Gordon counts them down to hands off.

Alexander’s looks bad and Sofia looks bereft. They call Alexander down and he says his cake looks like a 5 year old made it. He says it’s the worth thing he’s ever cooked. Lemon curd is leaking out of the sides, it’s lopsided and sloppy. He says he thinks the taste will be good even if the presentation isn’t.

Joe cuts in and says it’s not a good sign. Joe says it’s too dense and takes a nibble. He walks away without comment. Graham tastes it and says it’s undercooked and is definitely not his best work. Gordon says it’s the first time he’s seen him struggle and that he shouldn’t have overcomplicated it. Alexander is worried.

Dara brings her chocolate layer cake down next. It has spiced pepper ganache as well. Graham asks how confident she is and she says she’s really confident. He cuts it and the layers are nice and fluffy, it smells good and he says he can’t believe she pulled that off at 12. He says the cayenne and raspberry are perfectly nuanced and she hit it out of the park. Joe takes a bite and says Graham likes cake. He says he loves her cake and the spiced chocolate is brilliant and is perfectly balanced.

Kaylen brings down a terrible looking cake – vanilla cake with mixed berry buttercream. She says the layer landed funny when she took it out. She says she’s never made a layer cake before and she thinks it’s pretty good for a first time. Graham tastes it and says the sponge cake is dense. Gordon says hers doesn’t have a visual wow factor and the icing doesn’t have enough sugar and the sponge is undercooked and floury. He tells her it was a gallant effort and she’s disappointed in herself.

Troy brings down a lemon cake with crunchy frosting. Graham says it’s a little sweet for him and there’s not enough frosting. He says he ran out.

Sofia is embarrassed by her chocolate cake with berries and buttercream. Her layers are thin and mushed together because there wasn’t enough icing between. Joe says she needed more butter. Gordon says the oven was a little too hot and crisped the edges but says he’s amazed that she bounced back to that level after her breakdown.

Gordon tells them they all did a good job and it was a tough challenge. The judges talk and then call all the kids down front. Gordon tells them that there are two standout cakes that were phenomenal. Gavin and Dara had the best cakes and are in the top 6 and he sends them up to sit with Sarah.

The other five stand close. Alexander is crying and Kaylen comforts him. Joe calls Jack up and says his wasn’t the best but it was great and he sends him safe upstairs. He’s amazed that he was ahead of Alexander and is proud of himself. It’s down to Troy, Alexander, Sofia and Kaylen.

Gordon announces the two that are safe are Troy and Alexander. Sofia and Kaylen are going home. The kids cry and hug. Joe looks sad himself. Gordon calls the girls up to say good-bye and tells them it was a job well done. Sofia says she thinks Alexander is going to win and Kaylen says she thinks it will be Dara.

Sofia says it’s okay because everyone will go home except for one anyway. She’s excited because she made a whole new batch of friends that like cooking. Kaylen says she’s glad she got to cook in the MasterChef kitchen and says she wants to cook and come back and win it next year.