Miley Cyrus, Liam Hemsworth Wedding Still On – But She Steps Out Without Engagement Ring 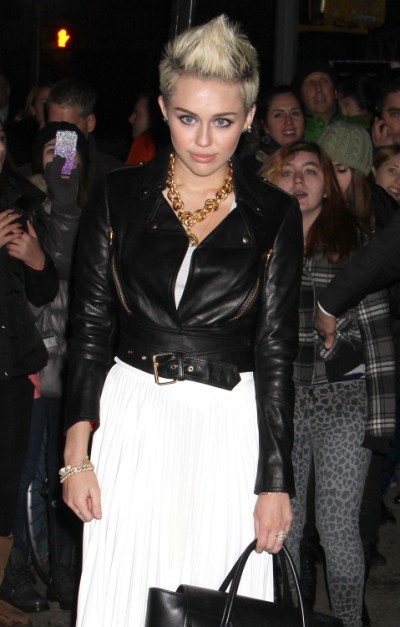 The Miley Cyrus/Liam Hemsworth wedding is still very much on, the Hannah Montana star adamantly tweeted recently, but for how long? How much more scrutiny can this incredibly young couple take? They’ve tried to stay under the radar but Liam’s recent car ride with January Jones and intense flirt fest with Emma Watson after the Oscars ruined all of that. Is Miley holding on to someone who doesn’t want to be held? Could our answers be found in a missing engagement ring? Miley Cyrus was just spotted out with that little love token mysteriously missing leading TMZ to think the end is very much near. Are we surprised or could Stevie Wonder see this one coming?

Will you laugh at me if I say I’m surprised? I know! They’re young! They’re immature! They’re celebrities. They have no chance, right? But… I liked them. Liam is good for Miley. She’s not half the famewhore she used to be (although her tweeting is still rather annoying). And he seems like a cool dude who enjoys lazy Sundays to Hollywood parties. Everyone has rough patches, right? But not everyone is strong or smart enough to ride them out when they’re in their early 20s.

And maybe Miley just didn’t feel like wearing her engagement ring that day. I rarely wear my wedding ring unless I’m going somewhere more glamorous than Target (which doesn’t happen very often). But Miley is a child of social media. She knows she’s going to be photographed and she knows what a missing engagement ring implies. Was she sending a message? Ah! This is ridiculous but it’s how that generation works. Everything’s a game. Everything’s done for attention. Everyone must know everything regardless if you even bother to open your mouth. I don’t want to believe this means anything. On a normal person, it wouldn’t. But this is Miley. She’s grown up in this relationship, but we can’t forget, she’s still a child star. Privacy is an afterthought.