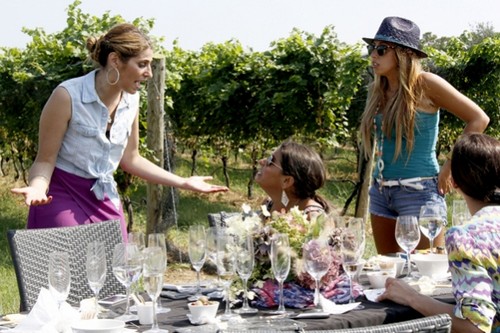 Our favorite new Bravo show this season PRINCESSES: LONG ISLAND airs tonight with a new episode called, “The Elephant in the Vineyard” on tonight’s show the girls decide to take an end-of-summer trip to a vineyard. Did you watch last week’s eighth episode? We did and we recapped the episode right HERE!

On last week’s show Joey’s father gave her a 90-day deadline to move out of the house, and when Joey went apartment shopping with Amanda, she realized just how painful that was going to be. Meanwhile, Chanel was going through a shakeup of her own — the loss of her baby sister to her husband. Chanel’s sister’s wedding had finally arrived, and it’s a classic Great Neck modern orthodox Jewish affair.

On tonight’s show Amanda satisfies her engagement fever by going ring shopping with little sister Taylor. She has Jeff and his parents over in the hopes of bringing their families closer together, but dinner comes to a screeching halt when Babs disapproves of Jeff’s intentions. Despite the discord between Joey and Ashlee, the girls decide to take an end-of-summer trip to a vineyard, followed by a boat ride on Erica’s dad’s yacht.  In a shocking twist, the day at the vineyard goes from fun to farkakt when Erica decides to bring up the elephant in the room — the Ashlee/Joey issue. Insults, anger, tears, and drama ensue as one of the girls disappears.

The show begins with Amanda and Taylor doing some shopping. The two stop at a jewelry store to look for engagement rings for Amanda. When Amanda sees a Hearts on Fire ring she thinks it is sign cause everyone calls Jeff, HOF. Amanda comments on how her mom should be there but she still doesn’t approve of her getting married. The sisters have a chat about their mother. Taylor thinks Amanda and Jeff are perfect together. Taylor wonders if their mom could ruin Amanda’s relationship. If that happens Amanda admits she would block her mother out of her life.

Erica goes to Ashlee’s house so that they can clear the air about the whole Joey situation. Ashlee tells Erica that Joey is saying Erica told Joey Ashlee said she was a bad person. Erica denies saying that and says Joey put her and Amanda on the spot. All Erica said was that Ashlee said that Joey rubbed her the wrong way. This of course gets Ashlee mad at hearing what Erica has said. Ashlee says Erica is innocent and that she wants to protect her from being manipulated by Joey. Erica now says she sees that Joey is stirring the pot. The two make plans for Friday night boat ride with Erica’s parents, which Joey will be at.

At Amanda’s house her mom, brother Jordan and Taylor prepare for a dinner with Jeff and his parents. It is their first time meeting. Amanda gives her mother guidelines of what to talk about. Jeff his mom Gail and Dad Charlie arrive for dinner. The night kicks off with a toast to Jeff and Amanda, thanks to Gail. Then comes a talk about Charlie going to the dermatologist, which makes Babs, Amanda’s mom uncomfortable. That is nothing though compared to Jeff giving a speech to Amanda bout how much he loves her and that he is in it for the long haul. Amanda’s mom is not happy when Jeff’s parents shared how happy they are that Amanda and Jeff are a couple. It gets tense when talks of Amanda moving out of the house to move in with Jeff comes up.

Casey and Leila meet up for drinks in the city. Casey hashes out all the drama that has been going on in Long Island. Leila brings Casey back down to earth as Casey reveals that she wants different things than her friends. The high-school girl drama comes up and Casey says it feels like high school.

Erica, Ashlee, Chanel and Amanda meet up to go to the Vineyards then have Erica’s dad pick them up on the boat. Joey arrives later and the dynamic instantly changes. Ashlee gives Joey the cold shoulder. Joey says hi to everyone but Joey. On the way to the winery Ashlee and Erica talk about Joey in one car while Amanda and Joey talk about Ashlee in another car.

While they get a tour of the winery all the girls are civil, even though things between Joey and Ashlee are icy. Ashlee gets afraid she when she has to walk up a huge flight of stairs to check out how the wine is made. She has a fear of heights. Out in the fields there is a surprise for the girls, a table with whine just for them. After a nice presentation from the winemakers the girls are left alone to enjoy their wine. This causes some trouble. Joey actually pees outside in the vineyard. Erica goes with her and the topic of Ashlee comes up. Erica wants them to clear the air before they all get on the boat. That is the beginning of a big fight between Joey and Ashlee, who basically say all the stuff they have said before too each other. Chanel tries to make peace but it doesn’t go well. Then Amanda gets involved which makes Ashlee mad then when thinks Amanda is taking Joey’s side. Joey tells Ashlee she wants to be left alone.

The fight with Amanda and Joey and the winery escalates when Ashlee and Joey just continue to go at it without listening to anyone. Chanel goes off on both Ashlee and Joey for yelling. No one can get a word in besides Ashlee and Joey all three other girls get frustrated with all the drama. Ashlee goes off when she learns Erica lied to her about showing Joey a text message from Ashlee. Chanel and Ashlee get to up leave as Ashlee continues to yell at Erica for lying. Ashlee feels ganged up on by Erica, Joey and Amanda. Ashlee leave the table as Erica breaks down in tears. Before she leaves Ashlee talks about Joey’s mom sending Amanda and Joey into a frenzy. Chanel tries to defend Ashlee but Amanda won’t listen to it. A crying Ashlee calls her mom to get her out of the winery. Sides are clearly drawn as the other girls talk about what happened. Chanel goes to find Ashlee. Chanel calls Casey to tell her what went down. It now seems Amanda and Erica are on team Joey and Chanel and Casey are on team Ashlee.

Rob calls Erica and she relays the drama of the day. Erica is furious at Ashlee for jumping all over her. After the call Erica tells Joey and Amanda the three of them are leaving to head to her dad’s boat.

As Ashlee see’s the other three girls come she takes off running with Chanel after her. Ashlee heads to the highway with Chanel after her. Once she calms her down Chanel tells the other girls that she is going to go back with Ashlee. It is decided they can’t all hang out together anymore. When Chanel goes back to get Ashlee on the highway she is gone and not answering her cell phone. Chanel walks around looking for her. Chanel stops the car with the other three girls, who are annoyed that she delaying them. Chanel walks away in search of Ashlee as the others leave the winery.