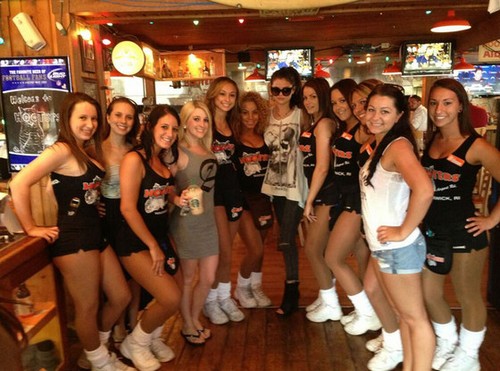 Selena Gomez just uploaded an image of her posing with her ‘hooters’ to twitter. No, that is not what it sounds like. Or maybe it is, depending on what you were thinking. Selena uploaded an image of her posing with the other ‘Hooters Girls’, a.k.a. waitresses who work at the famous restaurant chain. You know, the same restaurant chain that’s more popular for promoting its scantily clad women than their actual food.

Gomez has always been vocal about her connection to Hooters, telling a magazine earlier this year that she and her dad used to go to Hooters since she was seven years old. Um, creepy much?

Anyway, the picture that she uploaded sparked debate online about whether Selena herself would ever join such an establishment. I think the answer to that is a big, resounding no. Why would she need to? She makes millions of dollars singing crappy songs and pretending to date man-children. Yes, both Selena and the Hooters Girls have one thing in common  – which is that they both have to dress scantily for their jobs… sometimes. However, the pay scale for their jobs is on two different ends of the universe, and Selena’s too busy pimping her new album right now anyway.

For those of you who haven’t been following Selena Gomez news, Selena is currently in the midst of her are they together/are they not together tour with Justin Bieber. Just kidding, it’s not actually a tour. If it was, you can bet that it would be sold out.

The Biebz is actually on his Believe worldwide tour while Selena is promoting her new album, Stars Dance. Conveniently enough, Selena has made sure that she’s staying in the headlines even while she’s away from Justin.  No doubt, when the rest of the singles are about to come out, you can expect another Selena and Justin ‘reunion’.