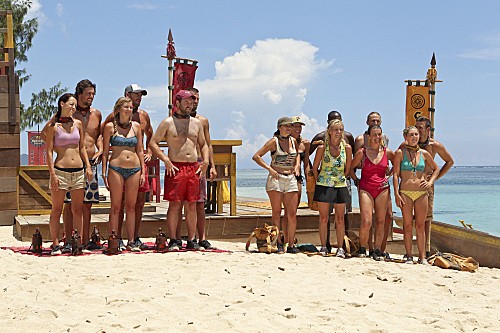 Tonight on CBS their Emmy Award-winning series SURVIVOR continues with another new episode called, “One Armed Dude and Three Moms.” On tonight’s show a shocking blindside at tribal sends another castaway home. Did you watch last week’s episode? We did and if you want to catch up we have a full and detailed recap, right here.

On last week’s show a family rivalry took center stage, leading to an emotional breakdown. Meanwhile, the tribes watched in disbelief as a castaway quits the game and a shocking blindside played out at tribal council.  At Tribal Council Rachel lost and she was sent home.  In a shocking move Colton quit the game and Jeff revealed that last season Colton faked appendicitis.  At the end of John was blindsided and he was sent to Redemption Island with his wife.

On tonight’s show for the first time ever, a Redemption Island battle pits husband against wife. In another series first, a castaway refuses to accept an immunity clue and a shocking blindside at tribal sends another castaway home.

Voted off, John goes to find Candice on Redemption Island and she says she knew he was going to be too trusting of people and that it’s not good. She wishes she was there with him to give him more pointers and keep him on his toes. Tadhana tribe is smack talking about how they blindsided John. Brad says John’s not a good liar and he had him hooked from the start. He’s saying that you have to watch out for the other tribe because of the personal relationships.

Jeff brings out the Redemption Island castoffs and Candice gives Brad the finger. He asks her how she feels about the competition now and she says she has someone to hate: Brad. She tells him to look away from her and calls him a child. Monica defends hubby Brad and says there is a whole tribe voting. Candice accuses Brad of marginalizing and hushing women. John actually takes up for him on that note but then tells both tribes that everyone that has been voted out was Brad’s choice.

The Redemption challenge commences. They must weave a key along a rope to unlock a bag at the end of a wood ladder. From there, they get puzzle pieces. They are all neck and neck building a 3D puzzle that looks pretty tough. Candice is struggling somewhat. John is ahead. Marissa is doing well.

Jeff says that Candice is always calm unless she’s yelling at Brad. Brad actually helps John correct a piece and whispers to a Tadhana mate that he can get John to like him again. John wins. Gervase is hassling Marissa which is frustrating her and making it even harder to concentrate. Candice takes second place. Marissa is out of it and headed home after nine days. Gervase says he’s impressed with his niece but she’s teary anyway. She burns her buff and heads off.

John gets to decide who gets the hidden immunity idol clue. Candice tells him to give the clue to Monica. She wants him to put a target on Monica’s back. John does what she says and gives it to Monica. Brad immediately tells Monica to burn the clue and she does – tosses it right in the urn – something that’s never been done on Survivor before. Candice mocks her and says she’s doing what she’s told (but isn’t that what John just did?)

Aras says that was a smart move because it kept the target off her back and Monica says she’s in a good position in the game and doesn’t need the clue.

John and Candice are happy hanging out on Redemption Island. He says in a weird way he should thank Brad for being able to hang out with Candice and still be in the game. They’re having a pretty good time all things considered.

At Galang Monica talks about the loved ones having a hard time in the other tribe. She tells the others she knows that Brad is working hard at the other camp and the others say that he’s a natural leader. She says he’s the strongest one out there and she wants to come to a challenge and not see her husband verbally accosted.

Gervase tells Monica that she knows him as Brad from Tampa, not Brad from Survivor. He tells her to open her eyes and says that someone on the other team is being the bad guy. She doesn’t seem to want any of that possible truth.

Brad says he was surprised by how nasty Candice was to him. Brad has already picked out a target for his next vote off – Caleb. He also says he has been a target his whole life. (Okay – wah – right?) Caleb, Hayden and Vytas agree that Brad is public enemy number one but they seem to be open to keeping open and voting off another girl if they end up at tribal council again.

Tyson’s arm is bothering him and he’s still in pain. Everyone tells him to take it easy and rest. They are all being really nice to him. He says in confession that he’s playing it up so he doesn’t have to do much and can save him strength. He also hopes it will give him sympathy but it may get him voted off as weak. He and Gervase have been sneaking off and drinking coconuts on the sly. They have been poking holes in them rather than cutting them so no one knows it’s them.

The girls find some coconuts with holes and Gervase thinks they’re busted but Monica suggests it may be a crab. Tyson says on his season they found a bunch that way and he doesn’t know how the animals do it but they do. The girls stupidly by it and the guys are free to keep hogging the coconuts and the valuable nutrients they provide.

At the immunity challenge, Jeff tells them they will paddle out to crates, dive down and release the crates. That will lead them to build a staircase then a puzzle that gives you a combination to a lock that will ultimately to release a flag.

Tea and coffee, biscotti and croissants are up for grabs! Or they can trade it for fishing gear (for the tribe that doesn’t have it). Tina and Kat sit out for Galang rather than Tyson as he thinks he’s still stronger than them even with a sore arm.

Brad Culpepper does the majority of the diving for Tadhana and helps them dominate. Wife Monica is also kicking butt for Galang. Tadhana gets all their crates but then has a mishap and three fall overboard. That takes their lead away!

Both teams are putting together the crates to build a staircase with a specific phrase spelled out. The tribes are neck and neck. Tadhana is done with the staircase first, but then there’s a puzzle that must also be done. Then Galang is done too and immediately catches up with the puzzle portion of the challenge. Galang is done with the puzzle first. The combination is next. Tyson has that, picks out the right key and they win yet another challenge!

Laura feels bad because she has gone head to head with daughter Ciera again and has once again defeated her. She’s worried that her victory will send her daughter home…

Tadhana drags back to camp disheartened. Hayden doesn’t understand how a stronger team lost to three moms and a one armed dude. Ciera says that after a loss they guys go get water and plot against the girls but then today the routine changes. Brad hangs back and tells them to vote for Caleb. Ciera isn’t sure if he’s lying but agrees to his face. He tells the girls he has not lied to them and goes off when the guys call him. Caleb wonders what’s going on with Brad since he didn’t come to the well with them as usual.

The guys say they want to vote off Ciera but Brad tells them he’s convinced the girls that it’s Caleb. Brad debates about Ciera vs Caleb because Caleb is stronger. He changes his mind and thinks Ciera is the way to go.

They trek off to tribal council. Jeff asks him if playing Survivor is how he envisioned it and he says it’s not. He throws Ciera under the bus and says they were ahead both time there were puzzles and Ciera lost it for them. Ciera defends herself and says she’s not going to give up and say it’s okay to vote her out.

Jeff asks Brad about him taking grief at Redemption for who gets voted off. Brad says he takes grief from the other tribe because they don’t want their loved one voted off. Jeff asks if it wouldn’t be easier to vote someone off who doesn’t have someone at the other tribe. That’s calling Caleb out! Brad agrees that it’s a consideration. Caleb says he knows he’s the low man on the totem pole and that Brad was campaigning against him. Brad says there was talk but no campaign.

Jeff tells them that it’s one of the most shocking votes and biggest shifts of power he’s ever seen in the game. Granted it was a power move, but damn, he was one of their two strongest players. He let his mouth tank his game…